Contractors and building owners put their reputation on the line with every structure they build. It’s important to understand the performance of your piping systems to ensure the reliable delivery of clean, safe drinking water.

To compare chlorinated polyvinyl chloride (CPVC) and cross-linked polyethylene (PEX), we must consider the service history of each, the water quality for each material and the main performance qualities that determine reliability.

Corzan® CPVC Pipe and Fittings are the most proven nonmetallic hot and cold water distribution piping system, having been reliably used to deliver clean, safe drinking water for nearly 60 years.

Over the past 20 years, PEX systems have been forced to reinvent themselves multiple times due to product liability concerns.

When you compare the track records, it’s not surprising that Corzan Piping System remains the most installed plumbing system brand.

There have been at least 22 plumbing failure class action lawsuits in the last 17 years and since 2008, 10 have involved PEX plumbing systems, stemming from failures due to contact with the drinking water.

Families and individuals rely on their plumbing systems to deliver clean, safe drinking water. Piping materials can improve water quality, but some are better than others at maintaining it. 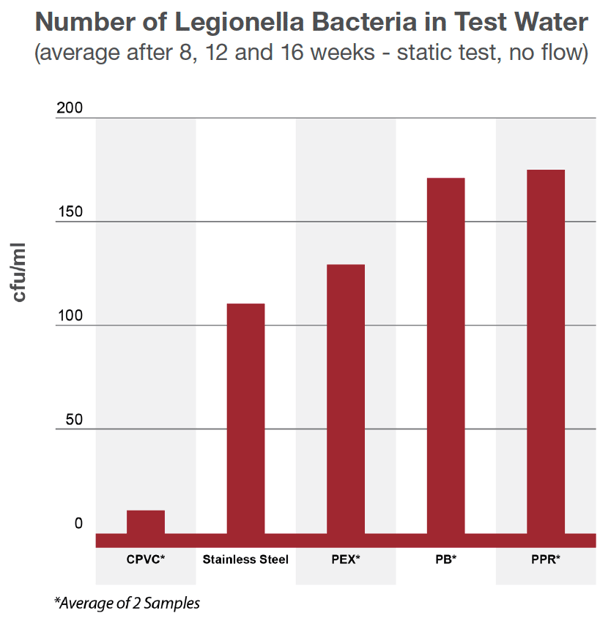 Corzan Piping System is only manufactured by the most reputable companies in the world. Each partner manufacturer is required to participate in our quality assurance program, which guarantees that every Corzan CPVC product you purchase will provide consistent quality regardless of where, when or by whom it was manufactured.

Biofilms can harbor harmful bacteria, such as legionella, a bacteria that can lead to Legionnaires’ Disease. Because CPVC better resists biofilm formation, harmful bacteria are less likely to accumulate in the pipe and affect the water supply.

Leaching is when impurities from the pipe surface contaminate the fluid. Studies have shown that PEX piping can leach substances, including gasoline components such as MTBE, ETBE, TBA and Toluene.

PEX is also a permeable material, meaning that contaminants coming in contact with the outside of the pipe may be transmitted through the pipe wall leading to water contamination. Unfortunately, there are no standard tests or published lists of materials that might cause permeation with PEX, leaving builders, plumbers and homeowners at risk.

In fact, as evidenced by this image of print-line permeation, PEX manufacturers themselves may not be fully aware of what materials are capable of permeating their materials. 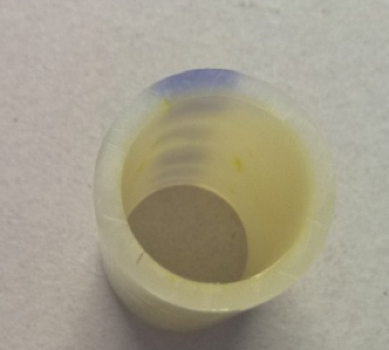 The ink from the print line on this PEX pipe has permeated almost completely through the pipe after less than 10 years.

Corzan Piping System do not leach any substances at unsafe levels into the supply, as determined by both ANSI/NSF Standard 61 and individual regional drinking water regulations.

Corzan CPVC will not allow outside contaminants to enter your drinking water through the pipe without causing the pipe to fail. Not only do Corzan CPVC pipes and fittings have superior permeation resistance, but they are also backed by the FBC™ System Compatible Program to assist manufacturers of products in determining their product’s chemical compatibility with our material.

Chlorine is the most common drinking water disinfectant in the world, so it is vital that pipe and fittings be resistant to chlorine and chlorine dioxide.

PEX is only tested to resist chlorine at levels up to 4.3 ppm, and the use of chlorine-based disinfectants reduces the temperature rating of PEX by 22°C (from 82°C to 60°C).

According to a 2017 technical note issued by the Plastic Pipe Institute® (PPI), it was found that any combination of elevated temperatures, pressures or UV rays can significantly reduce the service life of a PEX pipe. The presence of hot chlorinated water is known to degrade PEX pipe, causing leaks and failures.

Though PEX may carry a temperature and pressure rating of 6.89 bar at 82°C, the pipe is not listed to perform under those conditions in the presence of chlorinated water. Under these conditions, PEX can fail rapidly—sometimes less than 10 years after installation.

CPVC piping systems, such as Corzan Piping System, are extremely resistant to chlorine and chlorine dioxide degradation due to the presence of chlorine in its polymer structure. This natural immunity means a CPVC system can withstand chlorinated water at temperatures and pressures where PEX will fail.

Ultraviolet rays can come from the sun, fluorescent bulbs or other types of light bulbs. The impact of UV varies dramatically between Corzan CPVC and PEX.

UV light consumes the additives used in PEX to protect against chlorine and chlorine dioxide degradation. In some cases, just one month of exposure to UV rays can reduce the time-to-failure of PEX by up to 21%.

Care should be taken to protect all plastic pipes from excessive UV exposure and when handling aged pipes.

While UV exposure may cause discoloration in Corzan CPVC over time, the pressure-bearing capability and life-expectancy under normal use conditions is essentially unaffected by UV.

Recent third party research conducted by Home Innovation Research Labs, a subsidiary of the National Association of Home Builders (NAHB), found that CPVC installs are about 15% faster than PEX in its most common configuration.

Not only is the installation process for Corzan Piping System faster, but it can also save installers money. The system can be installed quickly and easily using inexpensive cutting tools and a solvent welding process that results in a joint that is actually stronger than the pipe or fitting alone.

PEX requires expensive expansion or crimping tools. And PEX fittings, including the body and crimp rings, typically cost several times more than comparable CPVC fittings, and take two to three times longer to properly assemble. Not only are PEX fittings more expensive, but even when properly assembled, they can result in joints that have been the subject of several high-profile failures. And in terms of strength, PEX does not have the rigidity necessary to be used for vertical risers.

Our team of product and engineering experts provide step-by-step instructions to properly install a FlowGuard piping system to ensure its long-term reliability.