A burn test is conducted to see how a pipe responds to a flame. CPVC inherently does not sustain a flame when the source is removed. In fact, immediately after exposure to fire, CPVC develops a protective char that acts as a thermal barrier, reducing the rate of burning. Watch the side-by-side comparison video to see how alternative materials perform during a burn test. Specifically: 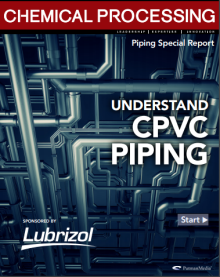 In this piping special report conducted with Chemical Processing, find out how CPVC is used in industrial processing applications and what sets it apart from alternatives.