Because many hazardous, highly reactive gases and liquids are used to keep semiconductor processes clean, accidental fires can occur. Even the smallest fire and subsequent smoke can:

A proactive solution—typically required for cleanrooms—is to use fire retardant materials across the cleanroom that are both difficult to ignite and give off little to no smoke.

When specifying cleanroom piping, ducting, flooring and more, semiconductor manufacturers should look for materials tested in accordance with FM 4910 standards.

How Are Plastics Tested for Use in Cleanrooms?

The FM 4910 “Cleanroom Materials Flammability Test Protocol” specifically evaluates a material’s fire propagation behavior and potential for smoke contamination—both important measures for cleanroom applications. The standard is intended to “verify that the product as described will meet minimum specific stated conditions of performance, safety, and quality.”

For a material to comply, three tests are involved to generate its Fire Propagation Index (FPI) and Smoke Damage Index (SDI).

During the ignition test, the sample is exposed to various external heat flux values, which are fixed. The material is observed and measured visually for:

The results of this test are used to calculate the critical heat flux—the maximum heat flux at or below which there is no ignition—and the thermal response parameter—an indicator of the ignition resistance of a material. 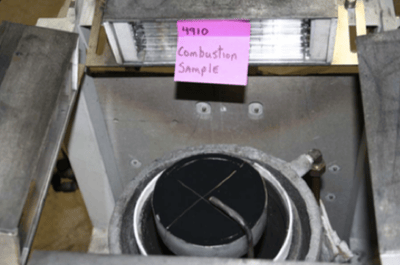 For the combustion test, after being exposed to 50 kW/m2 of external heat flux, the sample is measured for:

This derived yield of smoke figure is used to calculate the Smoke Damage Index (SDI), which indicates the extent of smoke contamination of the environment during fire propagation.

To simulate a large-scale fire environment, the fire propagation test is performed in a chamber of 40% oxygen. The bottom of a sample is exposed to 50 kW/m2 of external heat flux in the presence of a pilot flame.

Once the sample begins to burn, the test is continued until there are no visible flames and no material vapors are issuing from any side of the sample.

The purpose is to see if the fire will propagate by itself from the heat flux of its own flame. Behavior will be classified somewhere between “no fire propagation” and “accelerating fire propagation.”

The test ultimately determines the Fire Propagation Index (FPI), which is an index representing the propensity of the material to support fire propagation.

How Does Corzan® CPVC Perform?

Select Corzan® CPVC compounds have been evaluated and tested in accordance with the FM 4910 test protocol for fire propagation and smoke development. This includes both pipe compound and those used to manufacture sheet, allowing Corzan CPVC to be used across semiconductor cleanrooms. Common examples include ducting to carry away corrosive vapors from etching, and even for the construction of the cleanroom walls, flooring and more.

To learn more about what it means for a pipe to be fire resistant, as well as CPVC’s performance in each category, check out this blog post.

Whether you are looking for ways to optimize your cleanroom for semiconductor manufacturing or for a different industrial application, we are eager to help. With local support and experts in various applications, know that your call for support will be answered.