Whether commercial or industrial, selecting or upgrading materials for a piping system, ducting, tank lining or another large application is a major investment. These costs can multiply if the material chosen can’t stand up to harsh conditions.

The Corzan® CPVC compound is produced with tight quality control and testing to produce consistent results under the harshest conditions, especially in outdoor installations. Products made with Corzan CPVC have proven durable against ultraviolet light, temperature extremes, impacts and burial and harsh chemicals.

Corzan CPVC is suitable for outdoor installations due in part to its resilience against ultraviolet (UV) light compared to other plastics. PEX, for example, is quite vulnerable to UV light: UV light catalyzes the oxidation process of the chlorine-inhibiting antioxidants in PEX piping. Imagine a rooftop HVAC system made with PEX: stripped of its antioxidants by sunshine, PEX becomes vulnerable to attack from chlorine. This weakens the pipe, and the possibility of failure greatly increases over time.

Corzan CPVC is blended with an ideal concentration of both carbon black and titanium dioxide (TiO2) that has been tested to produce the best performing compound with the benefits of UV resistance. When exposed to sunshine or other UV light, Corzan CPVC’s grey color may change slightly, but UV light does not weaken Corzan CPVC. In fact, only a very small amount—a fraction of a millimeter—of the pipe’s surface experiences discoloration. A cross section of a pipe would reveal only the very top layer is discolored. Pressure-bearing components remain strong even after significant UV exposure and only degrade with age – as does any material. And Corzan CPVC can be painted with water-based acrylic latex paint to further protect it from UV exposure. 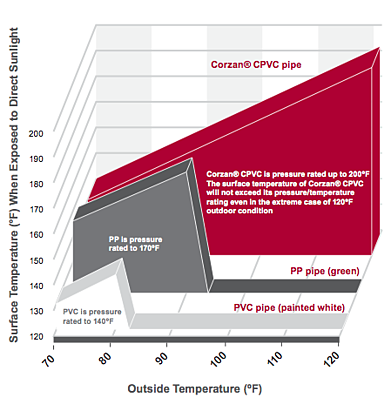 Fluctuating weather can have a serious impact on a material’s durability. High temperatures from the hot sun and freeze risks in the cold; the wrong material for an application could result in catastrophic failures. 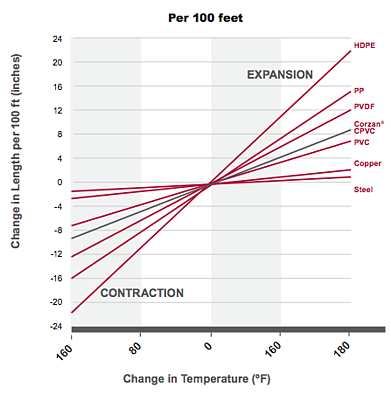 Corzan CPVC is engineered to maintain its physical properties well beyond average outdoor temperatures. For example, Corzan CPVC is pressure rated up to 200°F (93.3°C). 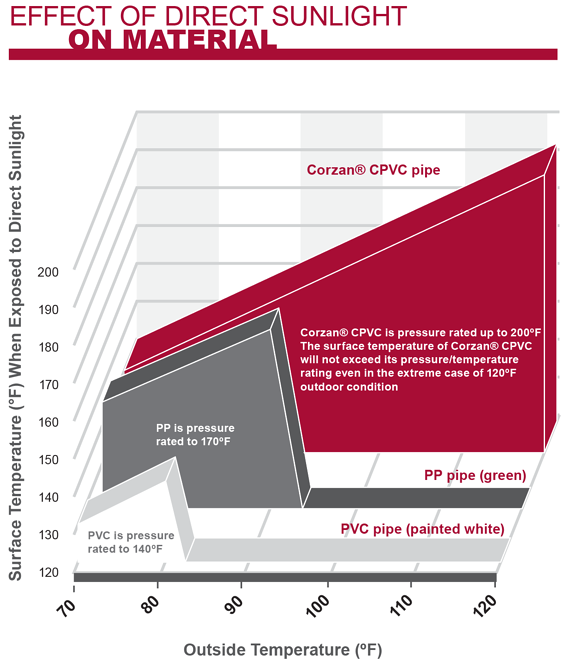 Corzan CPVC also has low thermal conductivity and has been carefully formulated to be minimally reactive to fire. Corzan CPVC will char when exposed to flame, but it will not catch fire, sustain a flame or begin to drip molten material as do other plastics.

On the cold end of the spectrum, Corzan CPVC is equally durable. Corzan CPVC has no known absolute minimum temperature for installation in outdoor environments. As an amorphous structured material that operates below the glass transition temperature (Tg), Corzan CPVC does not have a freezing point. Instead, the medium carried or held inside a system made with Corzan CPVC typically dictates minimum use temperatures. A general guideline of -15°F (-26°C) is typically used as the piping system’s lower limit.

Engineers and installers must pay particular attention to detail when installing any piping system in temperatures below 40°F. While CPVC has the ability to operate well below 40°F, it is essential to understand the engineering requirements and to properly train installers to ensure a successful installation.

Impact Testing and Other Material Tests

Not every material is durable enough to survive the rough circumstances of an outdoor or even underground installation like non-rooftop, buried HVAC lines or an industrial power generation plant.

The physical traits of the Corzan CPVC compound help it resist:

Corzan CPVC has been tested against myriad tough conditions like high temperatures and pressures, impacts and abrasions to ensure it can withstand whatever is thrown at it – almost literally.

Some of the harshest conditions are those inside pipes, tanks and ducting. Corrosive chemicals like sulfuric acid and hydrochloric acid must be transported with complete safety to keep workers and the environment safe.

Corzan CPVC can withstand more caustic chemicals than most plastics and innately resists corrosion, unlike metal. And only Lubrizol, inventor of Corzan CPVC, offers unparalleled chemical resistance data to arm system designers and installers with the information needed to keep a system made of Corzan CPVC functioning at peak performance for the long haul.

Simplify the design and installation process with this free calculator tool.

Check Corzan CPVC against over 400 harsh chemicals to see if it’s right for your application.

The temperatures and conditions in Arizona, USA, are intense. Corzan CPVC was up to the challenge.