Power generation plants of all types – from gas turbine combined cycle to combined heat and power – move large quantities of water, caustics and corrosives. Corzan® CPVC (chlorinated polyvinyl chloride) piping has provided operational advantages and cost savings to the power generation industry for decades, enhancing performance in a range of applications in new and existing facilities for long-term reliability.

Corzan CPVC is a specialized high performance thermoplastic designed for use in aggressive industrial environments. The material stands up to heat and pressure within power generation plants while offering superior resistance to corrosives and caustics for efficiency and a lower total system cost.

Power Generation facilities commonly have water treatment capabilities in the form of DI/DM water systems that utilize membrane beds. Older facilities may have chemical DI/DM systems that use harsh chemicals such as sulfuric or hydrochloric acid for treatment. Corzan CPVC is an ideal solution for these facilities to handle the harsh chemicals and protect the integrity of the pure water streams that feed the boilers.

Metal -- and specifically stainless steel and carbon steel – have been the power generation industry’s go-to materials for many years. Steel is strong, but it’s susceptible to corrosion and scaling. It is also a heavy material that requires a laborious and costly hot joint welding process for installation.

Corzan CPVC is a highly durable alternative to metal that eliminates internal and external corrosion, reduces installation time and costs, provides excellent hydraulic capabilities and limits plant delays because parts are readily available from manufacturers around the world. Corzan CPVC is one-sixth the weight of metal piping, which eases the installation process as CPVC piping can generally be handled and installed by two people as opposed to engaging the expensive equipment required to lift and move metal piping.

Corzan CPVC piping is most commonly joined by a solvent cement welding process, which can be applied anywhere without heat, flame or hot work permits. Solvent cement fuses the CPVC material together to economically create joints that are the strongest portion of the entire piping system. In addition, Corzan CPVC may be joined with mechanical joining systems.

Related article: Why CPVC is Used For Power Generation Plants

Corzan CPVC piping is an excellent choice for power generation plants due to its outstanding resistance to many corrosive chemicals at temperatures up to 200°F (93°C). Piping and fittings provide superior, long-term resistance to acids, bases and salts, including seawater and demineralized water.

Power generation plants use a range of treatment chemicals such as sulfite-based oxygen scavengers to remove any trace of oxygen that can cause corrosion in boiler feed water, which must be ultra-pure to ensure the long-term reliability of turbine blades. Aggressive chemicals such as hypochlorite, caustic soda, sulfuric acid, sodium sulfite, ferrous chloride, ferric chloride, hydrogen sulfide and alum are also commonly used in power plant applications.

Engineers designing a piping system for a power generation plant can verify the compatibility of Corzan CPVC with the type of water and chemicals used in plant processes by referring to the Corzan CPVC Chemical Resistance Table, which shows how Corzan CPVC tested with over 400 chemicals.

Power generation plants may install part of the piping system outdoors, which exposes piping and fittings to the elements, including direct sunlight. Corzan CPVC is specifically engineered to stand up to the effects of prolonged exposure to sunlight. In some environments, radiant heat combined with ambient temperature can push a material past its heat distortion temperature, which is often a concern with thermoplastics. Corzan CPVC maintains its physical properties well beyond the conditions it will be exposed to in the outdoor environment and is pressure rated up to 200°F (93.3°C). 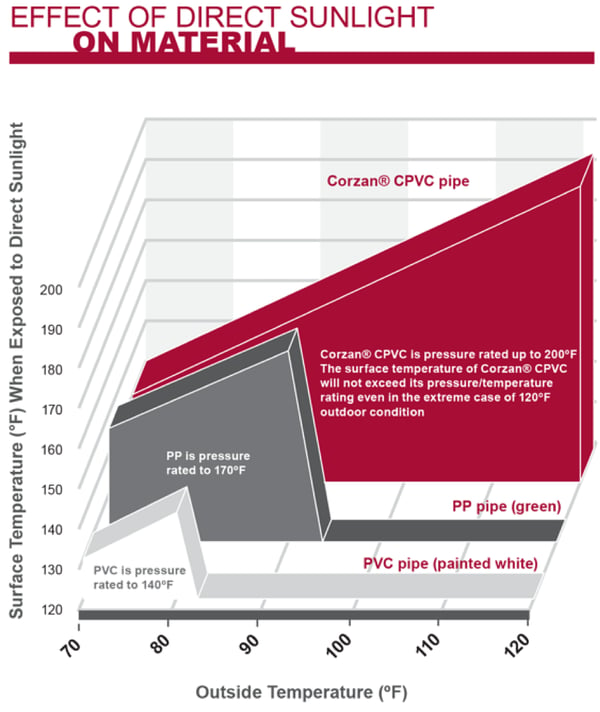 Incapable of Sustaining a Flame

Selection of FM fire safe materials like Corzan CPVC Piping Systems can have a profound effect on a facility's safety program. Designers should consider piping system fire performance when selecting materials for power generation plants. CPVC, in general, is engineered to limit flammability and smoke production.

Combustion is only possible in the presence of sufficient oxygen. A material’s limiting oxygen index, or LOI, is a measurement of the percentage of oxygen in the air that is required for a material to sustain a flame. The percentage of oxygen in the earth’s atmosphere varies but is typically about 21 percent, according to the National Weather Service. The lower the LOI the more likely a material is to burn when exposed to an ignition source.

CPVC has an LOI of 60 percent, which means that it must have nearly triple the percentage of oxygen that naturally occurs in the atmosphere to be able to sustain a flame. 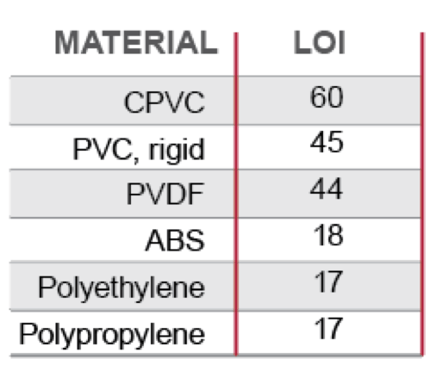 Corzan CPVC is known for its consistent performance in fire situations. Corzan CPVC develops a protective char that serves as a thermal barrier.

The Optimal System for Power Plants

Corzan CPVC piping systems surpass other materials in power generation plants based on performance and cost to provide long-term reliability in a range of applications. Corzan Industrial Piping systems have demonstrated over 60 years of success in a wide range of industrial applications worldwide.

To determine if Corzan is appropriate for specific applications within your power generation plant, contact us for a free suitability review and technical assessment.

Some of the details in this blog were taken from the following Lubrizol materials: