Designers and engineers often have dozens of choices when specifying piping systems for industrial environments. Over the years, however, plastic piping such as chlorinated polyvinyl chloride (CPVC) has become increasingly popular due to performance advantages such as outstanding corrosion resistance. As a thermoplastic, CPVC piping also offers optimum flow rates, safety benefits, ease of installation and little or no maintenance.

Despite these advantages, no single material is ideal for every application. Recognizing CPVC’s limitations and designing around the material’s restrictions will help ensure the piping system specified will meet the application’s requirements for long-term, cost-effective performance.

How brittle is it? There is no doubt that non-metallic piping has a significantly lower impact strength than metallic systems. The piping material’s ability to withstand impact or excessive stress must be considered when selecting the best materials for an application. Many designers have a hard time identifying the differences between PVC and CPVC. Testing demonstrated how differently the two materials performed across a range of temperatures, starting with freezing conditions. 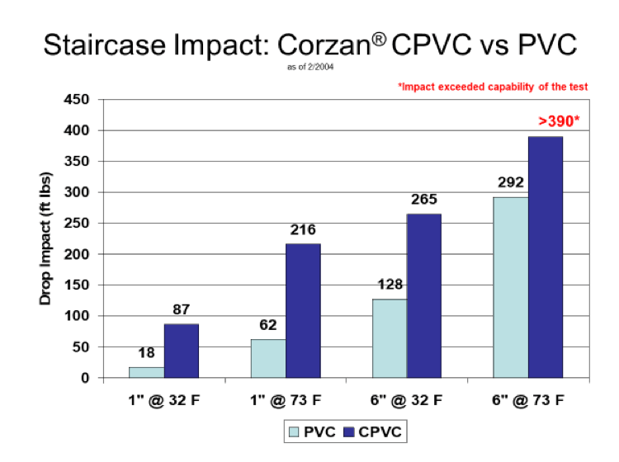 Although most CPVC piping materials fall within the standard 23337 classification level, piping systems that meet the 24448 classification are made from advanced CPVC formulations that have three times the impact strength of standard CPVC. Materials with a 24448 classification provide benefits such as fewer breaks and fractures, a lower scrap rate and easier cutting. They also offer a higher heat distortion temperature of 230°F compared to 212°F for standard CPVC, with the higher heat distortion temperature resulting in a lower probability of sagging or bending.

CPVC systems also include fittings that have the same pressure bearing capability as the pipe. The fittings offer performance advantages such as creep resistance along with the ability to better withstand long-term high-temperature hydrostatic pressure.

Consulting with the CPVC piping manufacturer will help determine how well the piping and fittings will perform in specific applications.

While CPVC is engineered to safely handle certain organic solvents that are soluble in water – such as alcohols – below a specific concentration, CPVC is not recommended for use with most polar organic materials. For the purpose of this discussion, we will only address pressure systems. Chemical resistance performance in drainage or gravity waste systems differs dramatically. Test samples of CPVC exposed to surfactants, certain oils or grease while under stress showed signs of environmental stress cracking, softening and swelling.

Over time, the piping system will likely absorb solvents that are insoluble in water – such as aromatics – even when the chemicals are present at very low levels. This could result in a decreased service life expectancy for the piping system, depending on the operating conditions.

Lubrizol, which manufactures the compounds that create Corzan® Industrial systems, and its customers have data on hundreds of different chemicals and provide recommendations on their compatibility when used with Corzan CPVC. The Corzan CPVC Chemical Resistance Chart shows Corzan’s response to over 400 different chemicals. 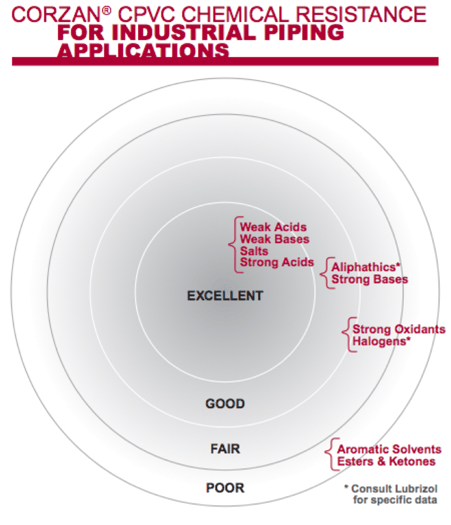 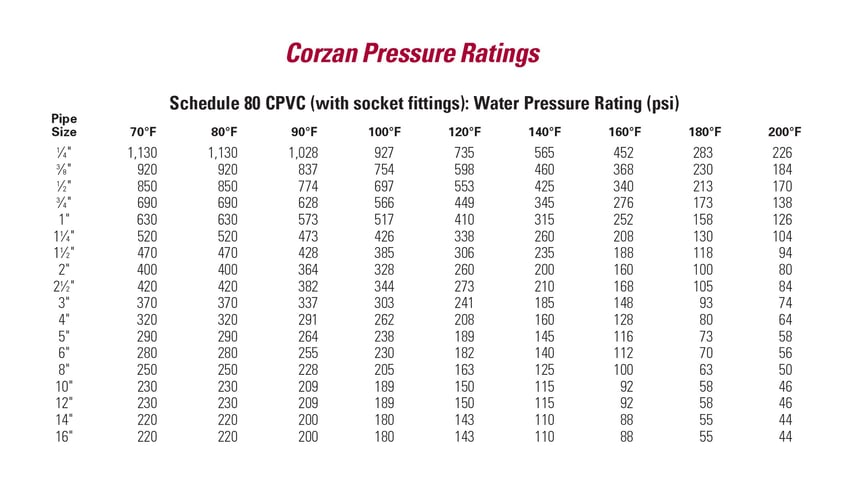 Since CPVC piping systems are less rigid than metal piping, CPVC piping typically requires more hangers that must be installed closer together for support. The chart that follows shows the maximum support spacing for Corzan CPVC piping.

In some situations, an application’s space limitations may not accommodate the additional hangers required for a CPVC piping installation.

CPVC piping offers performance advantages for industries worldwide. But designers and engineers must consider the two cell classifications of CPVC and the advantages of each. They must also address the general limitations of CPVC and how the material’s restrictions will impact each application, in general.

Corzan CPVC has proven its ability to withstand the immense challenges of the world’s harshest industrial environments for 60 years. Contact a Corzan engineering expert or one of our partner manufacturers for engineering guidelines to specify a reliable and cost-effective piping system or to schedule a free process suitability review and technical assessment.

Material Tests | What is CPVC?