A lifecycle analysis for piping materials begins with calculating the costs to install the system and includes maintenance and the total cost of ownership through the time the system must be replaced. Depending on the material selected, a piping system can last a long time, although the material must be able to withstand harsh chemicals, high temperatures, pressure and impact to ensure an extended service life and greater productivity.

Industrial facilities often used metal piping in the past largely because this was the type of material that was available. Metal piping, however, is heavier and thus more expensive to install in terms of material and labor.

Engineers continue to use non-metallic piping such as CPVC more frequently as they become better educated about CPVC’s capabilities. CPVC piping, for example, is roughly one-eighth the weight of comparably sized steel piping. And even though CPVC will require more hangers for support than steel, two people can lift and install a 6-inch CPVC pipe with little disruption to the plant environment. A 6-inch steel pipe, on the other hand, is too heavy to handle and will require some type of lift device for installation, which could result in costly downtime.

The joining method also impacts overall installation costs. Metal is joined by welding and requires workers with hot work or specialized permits using cumbersome equipment. Welding steel piping also has the potential to create a safety hazard as even a small chemical leak could result in exposure.

Non-metallic piping systems are joined with several joining methods such as hot air welding, fusion welding, mechanical joining and – the most popular method for CPVC –a two-step solvent-cementing process that chemically fuses the pipe to the fitting for a highly reliable joint. When properly installed, a solvent-cemented CPVC joint becomes the strongest part of the entire piping system and offers greater durability than either the pipe or the fitting alone.

Downtime can cost hundreds of thousands of dollars, which is why specifiers must choose a piping system that will eliminate maintenance and lost productivity. A Texas chemical company, for example, recently suffered productivity loss due to repetitive LOPC (Loss of Primary Containment) incidents, which resulted in substantial productivity loss estimated in the $4 million range.

While metal piping offers performance advantages such as higher pressure-bearing capabilities, it is highly vulnerable to internal and external corrosion, which will result in added maintenance or early replacement. Metal is also susceptible to flow-restricting scale buildup, which increases pressure drop and can contaminate the process.

A properly installed CPVC piping system requires little or no maintenance. And, in the event a portion of piping needs replacing, the repair may easily be made without the need for a welder or lifting device, which could disrupt plant operations.

There have been many cases in which metallic piping systems provided service for approximately four years before requiring replacement; plastic piping such as Corzan® CPVC piping was able to perform over 12 years. The theoretical life of many non-metallic systems is as high as 50 years -- although most industrial application designs anticipate lifespans in the 20- to 30-year range.

CPVC is a cost effective solution

Cost is always a key consideration when selecting a piping system for a chemical processing plant. A recent cost comparison study conducted by Jacobs Nederland B.V. showed installed costs for different piping systems that are typically installed in the chemical processing industry. Study results for North America are illustrated in the following chart and include all materials and installation costs, except the cost for valves. 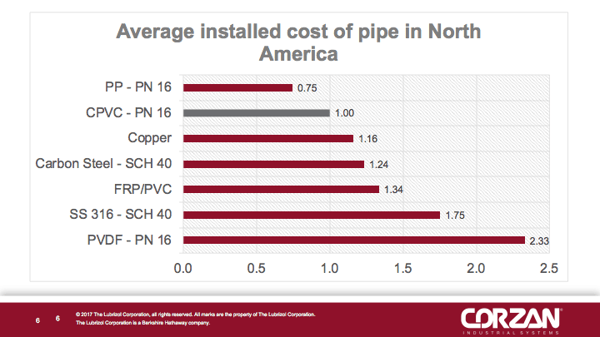 Corzan Industrial Piping Systems are not only cost effective but offer superior resistance to the corrosive chemicals and high temperatures found in the harshest processing applications, with Corzan pipe, fittings and valves inert to most acids, bases and salts, and aliphatic hydrocarbons.

Corzan Industrial Piping systems have demonstrated over 60 years of success in a wide range of processing applications worldwide. Contact us for a free chemical resistance, process suitability and technical consultation.