Fire Is the Most Common Safety Hazard In Chemical Plants

It was another quiet Sunday morning in the Houston metro area before residents were awakened by a bolstering fire and smoke when a storage vessel caught fire and quickly clouded the sky. One of the greatest safety concerns among many chemical plants and other industrial facilities had become a reality.

When a fire breaks out, normal operations can turn into chaos and life-threatening situations can develop within seconds as evidenced by the Houston fire and others. For this reason, fire performance must always be evaluated when selecting piping materials, including thermoplastics.

The tables that follow compare the flash ignition temperature for various thermoplastics and other materials.

Tests measure the inclination of a material to extinguish or spread a flame once it is ignited. A vertical rating of V-O indicates the material was tested in a vertical position and self-extinguished within a specified time after the ignition source was removed. During a vertical burn, the material must stop burning within 10 seconds, with no flaming drips allowed. Corzan CPVC has achieved the highest rating available within the scope of UL 94V-O.

Combustion is not possible without the presence of sufficient fuel. Corzan CPVC has a very high Limiting Oxygen Index (LOI) of 60 and is engineered so that it will not provide fuel for a fire in the form of oxygen under normal atmospheric conditions.

The earth’s atmosphere is 21 percent oxygen, which means Corzan CPVC must have more than double the percentage of oxygen that naturally occurs in the atmosphere to be able to sustain a fire. Corzan CPVC will char on the outside but will self-extinguish once the fire source is removed, as shown in the following burn test video. The following charts compare the LOI for CPVC with other thermoplastics. 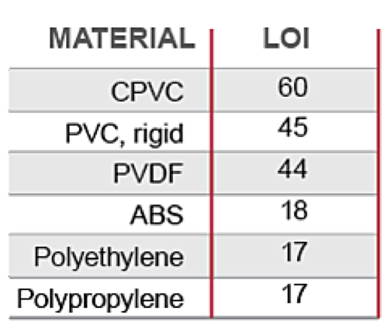 Factory Mutual developed a standard, FM 4910, for materials that require greater resistance to flame and smoke development to limit damage that can be caused by fires. Several Corzan CPVC compounds have been evaluated and passed the FM 4910 test protocol for fire propagation and smoke development, including gray duct compound for manufacture into seamless round extruded duct, gray pipe compound and the Corzan 4910 compounds used to manufacture sheet for fabrication into cleanroom equipment.

Compared to less expensive non-fire safe materials such as polypropylene (PP) and flame-retardant polypropylene (FR-PP), Corzan 4910 CPVC may not require additional fire suppression equipment, which will lower the overall cost of facility ownership.

Corzan CPVC has a very low thermal conductivity value that is approximately 1/300th of steel, which has a surface temperature that is generally equal to the temperature of the fluid that is conveyed. Facilities often take precautionary measures by insulating piping systems that are within reach of operators if the pipe’s exterior surface temperature will exceed 140°F.

With Corzan CPVC’s lower thermal conductivity, the surface temperature of CPVC pipe is significantly lower than the internal fluid temperature. Insulation is, therefore, usually not required for Corzan CPVC pipe, which lowers costs.

The figure below shows the approximate pipe surface temperature as a function of internal fluid temperature for a piping system with 73°F air circulating at .75 feet per second. Corzan pipe sizes of 2-, 4-, 6-, 8-,10- and 12-inch Schedule 80 are included. The graphic demonstrates the significant difference between steel and CPVC pipe, but should not be used for system design as the actual surface temperature of pipe in a working system depends on many factors such as ambient temperature, air circulation, velocity and direction, etc. 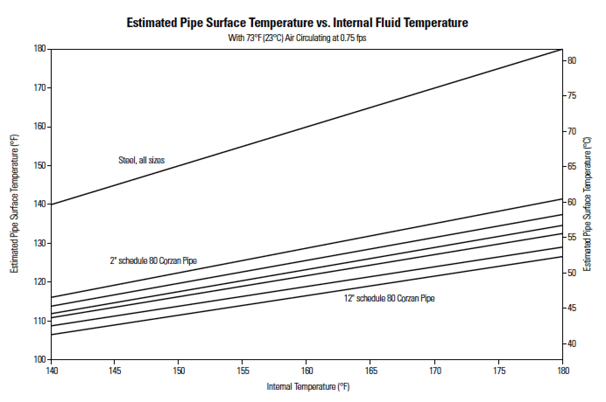 Fires in chemical plants and other industrial facilities can threaten lives, destroy equipment and cost thousands and even millions of dollars in cleanup. For this reason, fire performance should always be a consideration when selecting thermoplastic piping systems to ensure the material specified satisfies the application’s fire resistance requirements.

For more information, contact a Lubrizol partner manufacturer or a Corzan CPVC System Consultant for a free technical assessment.

Details for this blog were taken, in part, from the following resources: