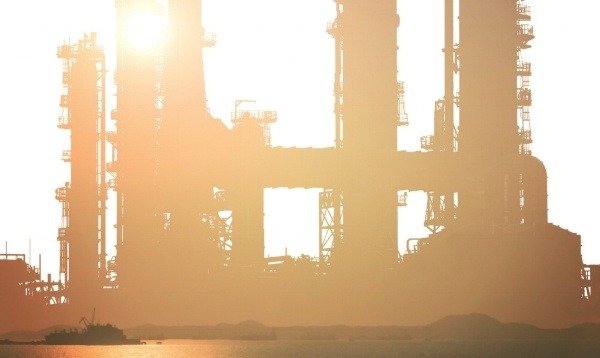 Read the full post below or check out the Thermal Expansion Infographic for a snapshot overview of this blog post. 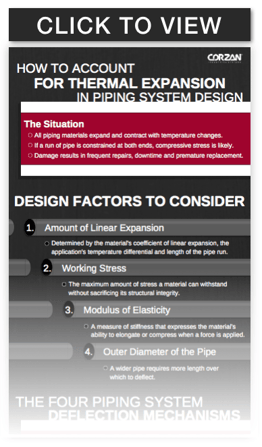 In the case of piping systems, we are most concerned with linear expansion and contraction, which affects both metallic and thermoplastic piping materials. If unaccounted for during the piping system design, length fluctuation can lead to costly issues. This is especially true for industrial plant systems, which often subject pipe to extreme temperatures and pressures.

Depending on the scope of that damage, plants may be forced to conduct frequent repairs, shut down processes, and potentially replace the piping system prematurely.

Fortunately, while expansion and contraction are unavoidable, resultant issues can be easily circumvented with the proper design considerations. Specifically, by employing one of the following deflection mechanisms:

Before we explain how to deploy each mechanism, we need to look at the four factors that influence their design.

The amount a pipe will expand and contract is dependent on three factors:

Every material has a coefficient of linear thermal expansion, which simply says per degree of temperature change you’re going to have X amount of linear expansion. There are empirical tests run on all piping material to determine this coefficient.

In the chart below, you can see the amount different piping materials change in length as the temperature changes.

Working stress is the maximum amount of stress a material can be subjected to when in use. All piping material can withstand some degree of movement without sacrificing its structural integrity.

The modulus of elasticity is a measure of stiffness. It is an intrinsic property of the pipe material that expresses the material’s ability to elongate or compress when a force is applied.

4. Outer Diameter of the Pipe

The outer diameter of the pipe affects the ability of the pipe to deflect stress. For example, a CPVC pipe run of 100 feet subjected to a max. temperature of 120°F and a min. temperature of 80°F will expand 1.6 inches, no matter the outer diameter of the pipe. But, a 1-in. pipe can deflect more stress than a 6-in. pipe, so the deflection mechanism (total loop length) only needs to be 2.47 ft. long for a 1-in. pipe. In the same situation, a 6-in. pipe will need a deflection mechanism 5.55 ft. long.

Depending on the area through which a pipe will run, engineers have four deflection mechanism options to use to account for thermal expansion and contraction. Each allows for some degree of pipe movement to help prevent compressive stresses.

To help illustrate each mechanism, we included a pipe-run scenario with the following dimensions:

For this situation, the linear expansion of the pipe is 1.6 in.

This mechanism tends to be the preferable choice of engineers. 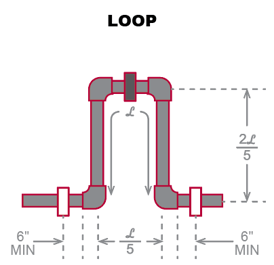 How it works: In the middle of a run of pipe, a “U” is configured and its center is restrained with a bracket. Each side of the pipe run coming into the U is hung with a hanger or guide, which allows the pipe to move back and forth. As the pipe expands, the opening of the U narrows, and with pipe contraction the U opening widens.

Using the example and provided image: L represents the total length of the loop, with 2/5L representing each vertical portion, and 1/5L representing the horizontal cross section where the restraint is placed.

This mechanism is used when the pipe needs to avoid fixed structures. 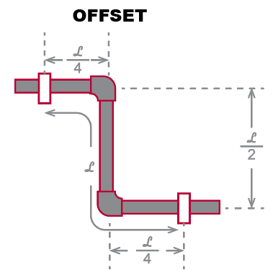 How it works: Placed in the center of a pipe run, each elbow allows for some degree of deflection as does the vertical length of pipe. The end of each pipe run is set using hangers or guides positioned a defined distance from the elbow. Using the diagram above, as the pipe expands, the top and bottom elbows will push in, causing the vertical length to angle to the right. With contraction, the vertical pipe will angle to the left. 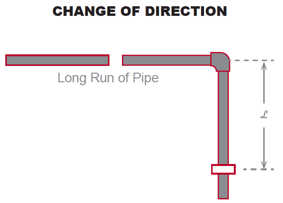 All piping system naturally include changes in direction, which can also be used as deflection mechanisms.

How it works: At the end of the long run of pipe, the corner elbow and adjoining pipe can allow for some degree of movement. If the adjoining pipe is long enough, engineers can place a hanger or guide a defined distance away from the elbow to account for both expansion and contraction.

Using the example and provided image: L represents the distance from the elbow to the hanger or guide.

Note: Minimum pipe support spacing must be taken into account when considering the use of a change in direction for expansion and contraction accommodation.

This mechanism is often used in tight, enclosed areas where it is difficult to include any expansion loops or offsets.

Expansion joints are specialized assemblies that act as a shock absorber allowing the pipe to move freely within another pipe while maintaining the necessary seal. This is often a more expensive option, and used as a last resort.

Calculate the Thermal Expansion Mechanism for Your System

To aid engineers in designing for Corzan® CPVC piping systems, we developed a Pipe Expansion Calculator. Simply input the pipe length and diameter, as well as the system’s maximum and minimum temperatures, and the calculator will provide the required dimensions for an Expansion Loop, Expansion Offset and Change of Direction using Corzan CPVC pipe. Remember, it never hurts to round up and install a larger loop than required.