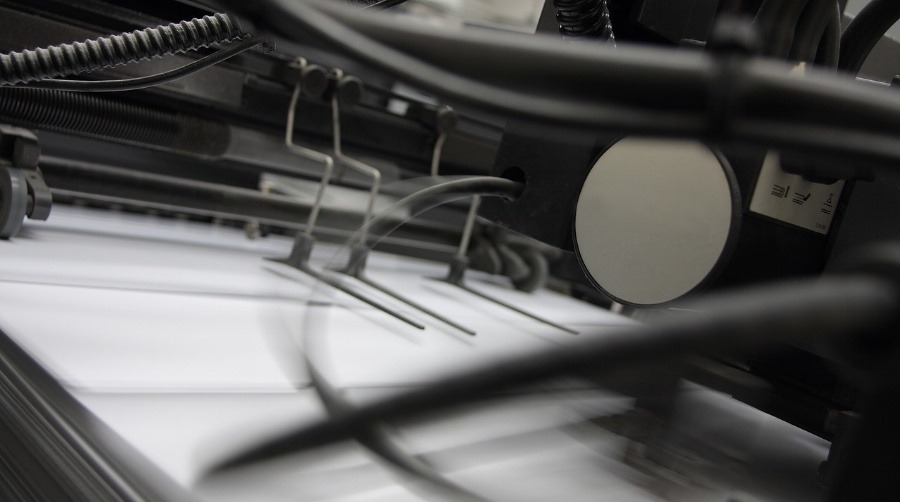 In 2005, and again in 2006, a Colorado-based litho plant decided to modify its two aluminum substrate manufacturing lines to increase capacity. Because of its already well established reputation, there was only one piping material considered by the engineering design team – Corzan's chlorinated polyvinyl chloride (CPVC).

This is because the high-performance material had already proven it provides an extended service life, improved process utilization and lower life-cycle costs. It had been doing so since 1992 when it was first used on a new fluid handling line at the manufacturing center for medical x-ray film, photographic papers and aluminum lithographic printing plates.

Nearly 15 years later, that schedule 80, CPVC line was still fully operational, providing the necessary corrosion resistance and mechanical strength to effectively handle the harsh chemicals being pumped under pressures up to 80 psi at temperatures up to 180˚F without leaks.

Along with the high pressure and high temperature operation, harsh chemicals used in the process included:

With such aggressive chemicals flowing, management needed the peace of mind that there would be no failures of any kind. There was, however, no need to conduct another materials study, because the manufacturer knew the Corzan system had previously helped it increase the level of quality control in its fluid handling system, resulting in maximized plant efficiencies, increased worker safety and a higher level of environmental protection.

For a detailed breakdown of Corzan CPVC chemical resistance, check out our Chemical Resistance Chart for a list of over 400 chemicals.

The new $3 million line modification and addition are designed to help the company increase its overall flow capacity. An older line with larger pumps required upgrading to match the operating capacity of the plant’s other lines. With the enhancement and addition, the company can now make the same products on this new line that it does in other parts of the plant.

Like many manufacturing plants, this litho plate plant strives for continuous production. Downtime due to maintenance issues is costly. In addition to cost issues, leaks in the system can jeopardize worker safety and environmental compliance. Impressively, the Corzan CPVC line that was installed in 1992 was still in place and provided the security, reliability and problem-free operation the management team was seeking.

QUICK INSTALLATION AND MODIFICATION: Very important from a productivity standpoint was that when modifications were needed, they were made quickly as a result of the fast, easy installation process available with CPVC piping. In fact, once the system is drained and the change is made, the line can be up and running in a maximum of 24 hours.

VERSATILITY AND CONSISTENCY: The CPVC system has proven so effective that it is the only piping material specified throughout the plant since the early 1990s. This was partially a result of the maintenance department’s desire to minimize any confusion or error.

The versatility of CPVC to stand up to corrosive chemicals in high temperature and pressure situations made it a material with vast applications across the plant.

EXPERT RELIABILITY: More specific than just CPVC, the company specifies only Corzan CPVC because of its confidence in Lubrizol as a partner that provides assistance in areas of testing, installation and technical support.

RIGOROUS TESTING BEYOND REQUIRED STANDARDS: Lubrizol also features a Quality Assurance Program, which requires Corzan pipe manufacturers to perform rigorous tests on their finished product. These tests are stricter than the required national standards to ensure consistent quality and long-term performance. In addition, Lubrizol creates all the base compounds for the Corzan CPVC components, providing uniform properties throughout the system. This permits engineers to design a system around a consistent property profile.

Back in the 1990s, the Colorado litho plant conducted a comprehensive materials study in order to choose a preferred piping material for its new plate manufacturing facility. The company had these two goals and expectations when choosing a piping material:

The comprehensive material study looked at a variety of materials, along with pros and cons of each.

METALLIC PIPE: Metallic pipe was not considered because of the harsh chemicals and likelihood of corrosion. Not only would the pipe not hold up, but there were concerns that the corrosive chemicals in the air would break down the insulation that’s required around metallic pipe.

PVC: Prior to the 1990s, the plant had been using PVC pipe for its fluid handling system. The PVC pipe previously used solved two problems presented by metallic pipe – it didn’t corrode, and as a thermoplastic which does not transfer heat, it did not require insulation. However, over time, even the PVC pipe had proved inadequate for the harsh demands of this application– even at lower temperatures.

POLYPROPYLENE AND OTHERS: Other materials, including polypropylene, were tried, but they were difficult and costly to maintain because they require expensive equipment and certified welders on the job.

In 1992, after the comprehensive materials study, a new fluid handling line, comprised exclusively of Corzan CPVC, was installed. It was installed in iron pipe sizes ranging from 1 inches (25mm) to 12 inches (300mm), including a wide variety of piping, fittings and valves.

For this demanding application, Corzan CPVC proved to be the best, most effective choice – back in the 1990s, as well as today.

We didn't even consider any other materials for the new process systems since we are so impressed with how well the Corzan CPVC has performed on the earlier line.

Nearly all the original line is still in place and functioning without any problems. And when we have made modifications, the CPVC installation process has proven to be faster and cost effective.

Engineering Technologist for the Litho Plant

Technical Support When You Need It

From spec writing to installation, the Corzan team of industrial and engineering experts are here to provide the advice, information and training needed to select and integrate the best piping solution for your application. Request a free consultation.