Not All Plastics Are the Same

Before 1959, using plastic for plumbing pipes was uncommon. Materials like steel, copper and lead were trusted to deliver drinking water all over the world. Like many new innovations, plastic piping faced skepticism when it made its industry debut, as many worried that plastic was not as durable as commonly used metal materials.

Fast forward to now, and plastic is regularly used in a range of plumbing applications and is often the preferred choice by installers. Unlike metal, plastic pipe is less likely to corrode, pit, or scale over time.

Still, some confusion remains, and it’s important to remember that each material is unique. Different types of plastic materials, including ABS, PVC, PE-RT, PP-R, PEX and CPVC, have different characteristics, including how they handle water conditions, water pressure, and water temperatures.

Here’s a guide to the most common types of plastics used in piping systems. When you take a closer look at each, their molecular structure isn’t the only difference between them.

ABS
Acylontrile Butadiene styrene (ABS) is a thermoplastic polymer that is commonly used for chemicals because it’s known for being resistant and tough.

ABS pipes should not be used at temperatures over 140° F or above. Its main use is in drain, waste and vent applications.

PVC
Polyvinyl chloride (PVC) is a plastic polymer that is used in many applications, including water and sewer piping. It’s a popular water distribution material due to its light weight, low cost, and limited maintenance. 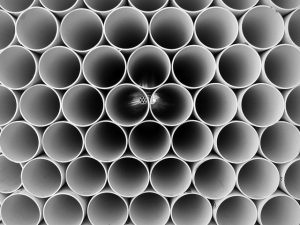 When PVC is chlorinated, CPVC is produced, which improves the flame and smoke properties of the material while also allowing higher temperatures to be used.

PEX
PEX (crosslinked polyethylene) is a form of polyethylene with cross links. PEX is commonly used in hot- and cold-water applications, hydronic water heating and insulation for high-tension electrical cables. 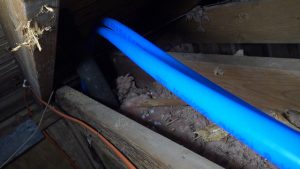 Although PEX is widely used for potable water, the use of chlorine to disinfect drinking water must be taken into consideration. According to Technical Note 53 issued by the Plastic Pipe Institute, “The use of PEX tubing in a potable hot-water plumbing system with an operating temperature above 140° F or system pressures above 80 psig or highly aggressive water quality or any combination thereof can significantly reduce the service life of the tubing.”

PE-RT
Deriving from Europe, Polyethylene Raised Temperature (PE-RT) has gained popularity recently in the U.S. plumbing market. Its primary use is for hot and cold water applications due to its ability to be used in higher temperatures.

Because its only recently been introduced into the U.S. market, it’s unclear the long-term effects involving PE-RT and U.S. water systems.

CPVC
Chlorinated Polyvinyl Chloride (CPVC) is a thermoplastic produced by chlorinating PVC resin. CPVC is a slightly more flexible material that can withstand higher temperatures than PVC. CPVC is also resistant to chlorine degradation and meets the stringent safety requirements of NSF Standard 61. 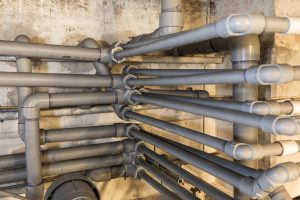 The job of an installer is to choose which material will produce the best results for the job. For a piping system that keeps drinking water clean, won’t corrode because of chlorine, and is durable enough to excel in aggressive water conditions, the choice is Corzan CPVC piping systems.