All piping materials expand and contract with temperature changes. When those changes are significant, and a run of pipe is constrained at both ends, the compressive stress can damage the pipe. This may lead to frequent repairs, downtime and shortened service life.

Corzan® CPVC will expand about 1 inch per 50 feet of straight length of pipe per 50°F temperature increase. In plumbing system design, it is standard industry practice when using Corzan CPVC to employ deflection configurations in accounting for expansion and contraction. Linear expansion is independent of pipe size and large diameter pipe is more rigid than small diameter pipe, so the larger the pipe size, the more length is needed over which to deflect.

For most operating and installation conditions, changes in direction of the piping will accommodate the effects of expansion and contraction. A change in direction simply entails creating a corner elbow for the adjoining pipe to allow for some degree of movement. The elbow moves out when it expands and in when it contracts. 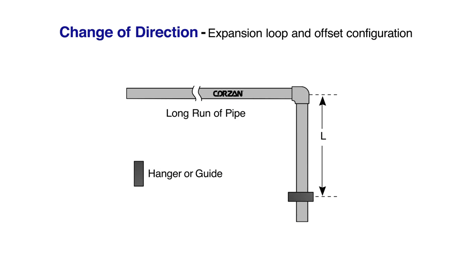 But long straight runs of pipe may need another approach to allow for pipe movement and prevent compressive stresses, especially if there is a possibility that something else could be installed behind the joint later and prevent its movement, or a fixed structure is already in place. In this case, pipe runs should incorporate either expansion loops or offsets.

The U opening of an expansion loop narrows on expansion and widens on contraction. A loop can be in any plane; it need not be horizontal or vertical only. Loops of parallel pipe runs can be nested for an efficient space-saving design. Engineers should use smooth hangers and straps in these loops that do not distort, cut or abrade the piping. Also to be avoided is the use of restricting hangers or restraints near the joints, leaving adequate space for axial movement between the expansion loop and any fixed structure or stationary object like a wall, stud or floor joist. 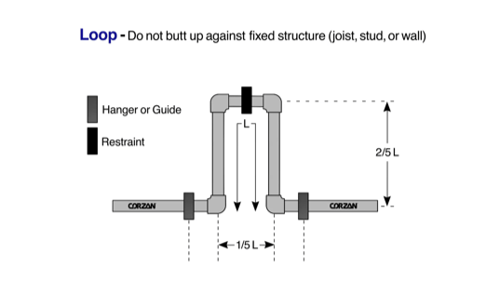 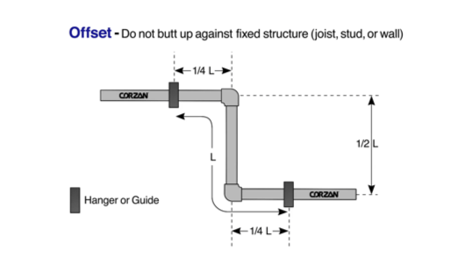 Corzan Piping Systems makes planning for expansion and contraction easier with the Corzan CPVC Pipe Expansion Calculator, which determines the deflection configurations needed to accommodate this movement for each run of pipe. This tool factors in the material’s modulus of elasticity at temperatures up to 180°F (82°C), the outside diameter of the pipe, the change in length due to the temperature change and the working stress at maximum temperature.

The engineer needs only to input pipe size, maximum and minimum temperatures, and pipe run length. The calculator then reveals the linear expansion of the pipe, along with the necessary dimensions for loops that will be long enough to prevent the pipe from bending beyond its limits while preserving the natural, lateral movement of the pipe and fittings.

Below, we see two examples of two different pipe sizes where the linear expansion is identical but the recommended expansion loop is almost twice the length.

Deflection configurations take advantage of Corzan CPVC pipe’s inherent flexibility and spread the compressive stress over the length of the connecting pipe piece. But keep in mind that the devil is in the details and challenges will always arise. For personalized support with your expansion and contraction challenges, our Corzan CPVC experts are always on call. This is just another advantage of designing with Corzan Piping Systems to achieve a long-lasting, reliable plumbing system.