WHAT IF SOMEONE HITS CORZAN CPVC WITH A FORKLIFT?

The original Corzan® Engineering Design manual included an appendix titled, “Things Not to Hit CPVC Piping With.” It included items like a baseball bat, passenger train and lightsaber. But, first on this list, was a forklift. Unfortunately, due to binder-size restrictions, the appendix had to be omitted. 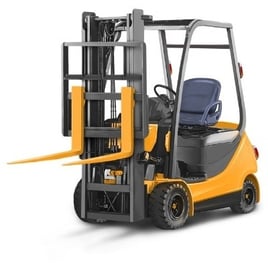 All jokes aside, the reality is accidents do happen and all piping material will sustain some degree of damage if subjected to any significant force, such as a direct, unprovoked forklift attack.

But, the severity of that damage and the resultant downtime can be limited by specifying the proper piping material.

Modulus of elasticity is a measure of a material’s stiffness. It is an inherent property of all pipe materials that expresses its ability to deform when a force is applied. Corzan CPVC is a flexible material thanks to its very low modulus of elasticity.

For less severe impacts, this flexibility gives Corzan CPVC, and thermoplastics in general, a distinct advantage over metal piping systems.

CPVC’s inherent flexibility allows it to absorb the shock from an impact. To a point, CPVC piping can bounce back into shape without any structural damage to the material. In addition, the shock transferred to the connecting system will be limited.

Conversely, metal has a high modulus of elasticity, making it very rigid, so its ability to absorb an impact is limited.

Depending on the type and intensity of the impact, metal piping can be more likely to dent or crease, impeding fluid flow. In addition, small cracks can form, weakening wall strength, limiting pressure capabilities and increasing corrosion concerns.

A lot of impact shock will also be transferred to the adjoining seams and joints, potentially multiplying the number of issues.

No pipe can stand up to a direct forklift impact, especially at speed and if the driver has a score to settle. In these situations, the piping must always be replaced.

The downside to metal is you often must contract with a pipe fitter, and they may be required to reconfigure some connections or welds. In addition, metal systems are inflexible, so subtle alignment changes may require expensive reconfigurations.

To replace specific sections of CPVC piping, any mechanical contractor or maintenance technician can do it with minor training. The piping is also lightweight and flexible so one or two workers can perform the repair without special equipment.

If someone at your facility has damaged a Corzan CPVC piping system with a forklift or any other type of machinery, contact our product engineering team for advice and support.