Case Study: Why Corzan® CPVC Is the Material of Choice for ResinTech Inc.

Why Corzan® CPVC is the Material of Choice for ResinTech

It’s not often you can describe a resin manufacturing facility as a labor of love. But with a story rooted in family history and dedication to the local community, it’s a fitting description for ResinTech’s new plant in Camden, New Jersey.

Building on a 40-Year Legacy

The journey to this massive new facility began humbly: in president Larry Gottlieb’s childhood basement in 1986. His father, Michael, an expert in ion exchange for water treatment, branched out on his own to use the resin technology for other applications. Larry recalls Michael turning the family kitchen into a laboratory during the day. Eventually, the family business grew up and moved to space of its own.

Around the time Michael opened his first dedicated production facility, Larry, who had studied mechanical engineering in college and was working in nuclear power, joined the family business. Michael’s other son, Jeff, also came on board from the banking industry. Father and sons worked side by side as the company expanded in size and scope over the decades, growing to five other facilities in five states.

In 2020, ResinTech opened the state-of-the-art manufacturing facility in Camden, New Jersey, eager to make more products domestically, staving off growing supply chain challenges and contributing to the community where it all began. The plant produces a range of water treatment products, including ion exchange resin, granular activated carbon, water purification cartridges, and high-purity water systems. The country’s first new ion exchange factory in more than 30 years, the facility has a capacity for up to three quarters of a million cubic feet of strong acid cation resin per year.

Producing water treatment products requires many chemicals and caustic materials that continually move around the plant through an intricate system of tanks and pipes.

The Camden facility contains nearly 32,700 linear feet of 2-inch, 3-inch, 4-inch, 8-inch, 10-inch and 12-inch process piping, about 80% of which is made with Corzan CPVC. Larry estimates he and project engineer specified Corzan CPVC for as many as 12 unique applications within the facility.

This includes transporting the resin itself, which moves around the plant as a slurry. Corzan CPVC’s superior resistance to corrosive chemicals, high temperatures and elevated pressures, with maximum actual useable range of up to 200°F (93.3°C) at 150 psi. These traits provide superior performance that no other industrial system, metallic or non-metallic, can match.

“I like to use Corzan CPVC in chemical use because, should there be an unexpected sidebar reaction, it’s essential that the pipe not fail,” Larry says.

Another application is a caustic dilution station, in which liquid caustic soda is diluted. The resulting chemical-liquid mix can reach over 140°F (60°C), a temperature too high for PVC and the solution too caustic for stainless steel. Neither is an issue for Corzan CPVC.

In simplest terms, Larry’s primary reason for choosing Corzan CPVC was peace of mind. Corzan CPVC is able to transport harsh chemicals at high temperatures and pressures without concerns about corrosion or other forms of failure. This is essential not just for the operational reliability of the plant but most importantly for the safety of everyone working there.

“If I can’t walk my wife and kids by what’s running through the plant, then I’m not going to do it,” Larry notes. “That’s why I chose Corzan CPVC.” 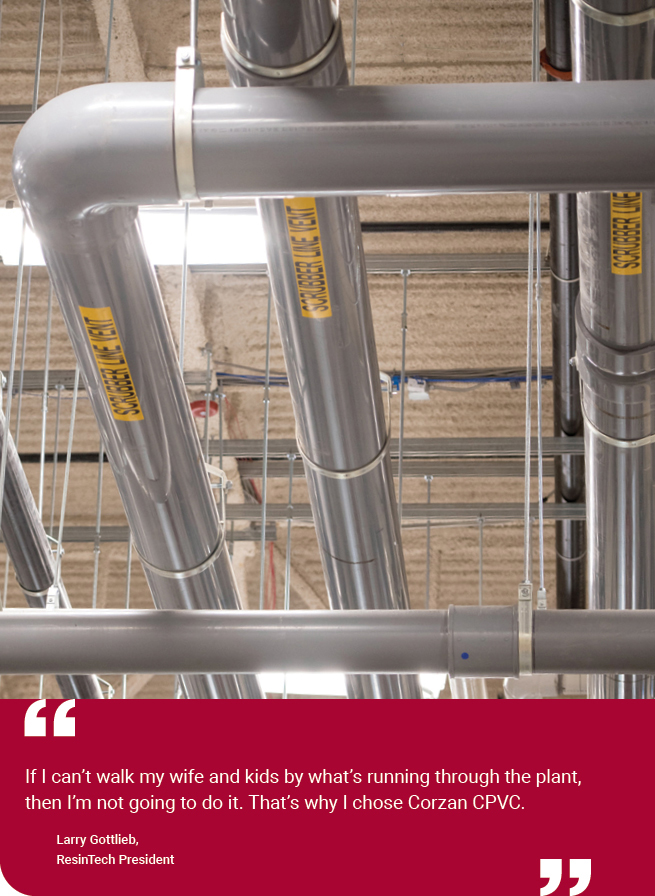 Along with the material’s performance, Corzan CPVC piping also brought tremendous installation efficiencies and associated cost savings. “It’s easy to cut, easy to solvent weld, easy to assemble and products are generally readily available,” Larry says. “So anywhere we could, we converted to Corzan CPVC.” This included the air purification system, a fume-scrubbing system operating under vacuum using large-diameter pipe. The team was able to use Corzan CPVC in lieu of fiberglass piping, which is more expensive to assemble.

Corzan CPVC is versatile, so while it excels in the plant’s extreme applications, it also remained a go-to material for their facility’s cooling tower piping and as an alternative to cast iron for drainage piping.

It also plays a critical role in emergency environmental mitigation, providing large-diameter containment piping that moves emergency overflows from a below-grade catch basin to a containment pit. Because the flows could contain any of the acids and caustics that reach the factory floor, the emergency piping needed to be as robust as the process piping in the plant above, and Corzan CPVC met the challenge.

Larry’s trust in Corzan CPVC stems in part from his history with the material. He first began studying CPVC in the late 1990s, applying the technology for applications including processing and tank internals. He found he was able to make filter laterals using lengths of Corzan CPVC pipe, which could be exposed to the extreme pH and temperatures within the tanks. Corzan CPVC has made a difference in his own work and in ResinTech’s.

“There’s a level of comfort that the material will behave as I expect it to behave in the applications that we use it,” he explains.

A Location Benefitting Company and Community

The Gottlieb family’s desire to manufacture stateside is only the beginning of the powerful story behind the new manufacturing facility and its location. Camden, a largely industrial city across the Delaware River from Philadelphia, was once an active industrial hub, home to manufacturers including RCA/Victrola, N.Y. Ship, VanSciver’s, DuBell Lumber and Dimedio Lime Company. Today, the area is dotted with brownfields and industrial remains of these once industry-leading companies.

But the bones of a robust infrastructure remain, and the City of Camden is working to attract new industries to the area. ResinTech’s roots are in Camden, truly the “City Invincible,” so reinvesting in the community was a priority. Before the ResinTech facility – which sits on several parcels across 30 acres – could be built, the company had to conduct extensive environmental remediation of contaminated soil, underground storage tanks and historic fill, as well as the abatement of lead and asbestos prior to the demolition of existing old buildings. Selecting who did this work was also a Camden-focused decision: The contractor who led abatement and demolition is a Camden-based businessman with strong community ties.

With ResinTech’s origins and his current home in Camden County, Larry felt the pull of strong ties while also recognizing the potential: With existing industrial infrastructure, the local wastewater system has the capacity to handle the discharge volume required for the plant. In addition, the location brings the company closer to labor—and the opportunity to bring jobs to the area where ResinTech began.

“It was the right place to move and grow our business,” Larry says.

It’s a testament to the forward-thinking innovation and commitment that began in the Gottliebs’ basement nearly four decades earlier. And Corzan CPVC is helping that legacy grow, keeping material moving safely and economically.

Notes Larry: “All of our product flows through Corzan CPVC pipe.” To read Larry's story, download the ResinTech case study.