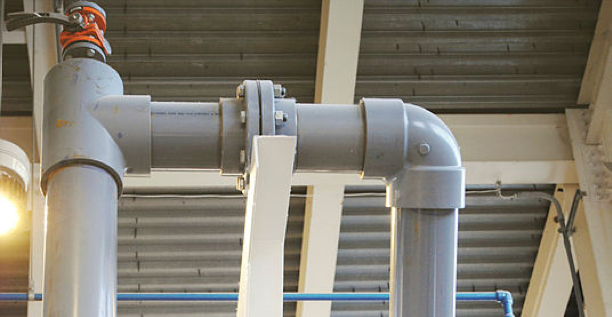 CPVC Outperforms Metal When It Comes to Maintenance

Metal may have been the material of choice for industrial piping systems during decades past. But the cost to install and maintain a metal system may overshadow performance advantages such as metal’s strength and its ability to withstand high levels of heat and elevated temperatures.

Many industrial applications – from the chemical processing industry and chlor alkali processing to the mineral processing and power generation industries – have gained tremendous value from piping systems constructed with chlorinated polyvinyl chloride (CPVC). Manufacturing and processing facilities find that CPVC piping, fittings and valves not only lower installation costs but they improve process efficiency and significantly reduce downtime and maintenance over the system’s lifetime.

Corzan CPVC technology is specifically engineered to satisfy the demands of the harshest industrial environments, offering advantages such as chemical inertness and the ability to withstand high heat and elevated pressures common to most industrial processes.

Pipe corrosion is one of the most challenging and costly issues associated with metal piping systems. Corrosion deteriorates metal, with pitting corrosion causing tiny pits along the length of the metal pipe, which diminishes the pipe’s wall thickness and reduces its strength. Crevice corrosion can occur where fluid ions concentrate in crevices around welds, flanges and other pipe connections. The ion buildup that results can quickly degrade material, which is why metal piping system leaks often occur at the seams first.

External corrosion is a big issue for plants located in coastal regions. The salt content within the water vapor can eat away at the metal pipe exterior and may require the pipe to be painted to protect the exposed surface. Some metal piping naturally develops an oxidative layer over its surface – or additives can be applied to create this layer. This oxidation helps to protect the pipe by creating a type of armor that is unsusceptible to attack. While this armor can protect a pipe against pH levels slightly outside of neutral, it cannot stand up to aggressive acids and bases.

The easiest and most effective way to reduce pipe maintenance and eliminate metal piping corrosion is to replace metal materials with piping that does not corrode, such as CPVC. Corzan CPVC piping systems are made of highly engineered thermoplastic to eliminate internal and external corrosion that can eat away at metal piping. CPVC differs from other thermoplastics such as PVC as approximately 40 percent of the bonding sites on the CPVC backbone are filled with chlorine atoms. These atoms surround the carbon backbone of the CPVC and are large enough to protect its carbon chain from conditions that often weaken other thermoplastics.

In addition, CPVC compound is inherently inert to acids, bases, salts and aliphatic hydrocarbons, all of which typically corrode metal piping. CPVC is strong enough that the aggressive ions that attack metal molecules flow right past the material, leaving the pipe unharmed.

Scaling is another threat to metal piping and can significantly decrease the system’s flow rate. Metal ions are water soluble at different pH levels and temperature ranges, which allows them to flow through a metal piping system with little or no resistance. If the fluid the metal is dissolved in falls outside of its solubility range, however, the ions can drop out of the solution and attach to the metal pipe walls. The ions will build up over time and create scaling around the pipe interior.

Scaling tends to occur in areas where eddying occurs in the flow. Eddies are typically found near imperfections in the pipe, such as around seams and flanges. Swirling fluid around the eddies develops a concentration of ions, which increases the likelihood of scaling. Processes that include calcium, magnesium, iron, aluminum and silica tend to be at a higher risk for scaling the metal piping. As scaling build up occurs, the pipe diameter can become constricted and pumping efficiency will decrease. Pressure will increase within the system and scales can flake off and clog filters or contaminate the fluid.

CPVC piping prevents scaling as the material has a significantly lower affinity to scaling than metal piping. Corzan CPVC pipe and fittings have a Hazen-Williams C Factor Rating of 150, with the higher the rating, the lower the friction.

New cast iron piping, conversely, has a rating of 120, which can drop to 60 to 80 if the material becomes worn or pitted. The Corzan CPVC piping will maintain its Hazen-Williams C Factor rating of 150 throughout its life.

The Cost to Maintain Metal vs. CPVC Piping

The costs incurred while installing a metal piping system are often encountered again when the system must be maintained. Regular maintenance will be required whether a facility installs a metal or CPVC piping system. The facility, for example, may need to integrate a new piece of equipment, alter the layout or replace sections of piping that are accidentally damaged.

A CPVC piping system offers several advantages over metal piping when it comes to performing maintenance. Replacing or repairing sections of a metal piping system usually involves contracting with a pipe fitter who may be required to reconfigure connections or welds. A metal system is inflexible and even subtle adjustments to the system’s alignments may require expensive reconfigurations.

In contrast, CPVC is joined with a fast and easy solvent cement welding process. Providing solvent welding training to a mechanical contractor or plant maintenance engineer will equip the individual to change, repair or modify a CPVC piping system. The pipe itself is flexible to a point and one or two workers can easily make alignment adjustments without requiring specialized equipment.

CPVC is also lighter weight and easier to maneuver than heavy metal piping, speeding maintenance and reducing worker strain and injury. The lighter material eliminates the need for heavy (and expensive) equipment to transport and hoist the piping into place.

Corzan CPVC Piping Is a Versatile Alternative to Metal

Corzan CPVC piping offers many installation and maintenance cost advantages over metal piping and provides durable and reliable long-term system performance. Corzan CPVC has a 60-year history of success in a wide range of industries and is manufactured using straightforward injection and compression molding techniques, with many Corzan partner manufacturers capable of creating pipe, fittings and valves for a variety of industrial applications.

Industrial facilities have the flexibility to use entire piping systems made of Corzan CPVC within their facilities. Using a single material for all system components limits complications and avoids costly configuration workarounds during installation and maintenance.

For further details about Corzan CPVC, contact a partner manufacturer directly or a Corzan CPVC System Consultant. Lubrizol product and engineering specialists are always on call to provide advice, information and training throughout the life of a Corzan CPVC piping system.

Information for this blog was taken, in part, from the following resources: