In almost all of the world’s industries, two core chemicals are likely at their foundation – sodium hydroxide or potassium hydroxide. Solutions of sodium hydroxide (also known as caustic soda) are commonly used in chemical processing, pulp and paper, water treatment, soaps and detergents, bleach manufacturing, textiles, and petroleum products industry. Solutions of potassium hydroxide (also known as caustic potash) are used in applications such as the production of potassium carbonate, potassium phosphate, liquid fertilizer, and potash soaps and detergents.

Sodium hydroxide and potassium hydroxide are very similar but not identical, more like fraternal twins. One thing they specifically share is that the application of each chemical, in solution, touches all of our lives. Sodium Hydroxide is very common as it is used in the manufacture of thousands of products such as drain cleaners, oven cleaners, soaps, detergents, paper, and many other cleansers. Similar to twins, sodium hydroxide has many synonyms such as caustic soda, lye, soda lye, and sodium hydrate which may be attributed to its wide range of available concentrations. The most common of which is 50% in liquid form.

Assuring the integrity of your process is a fundamental concern of the industry. The Chlorine Institute (CI), a respected industry technical association, publishes a resource, Pamphlet 94, that presents practical guidelines for the design, construction, and operation of storage and piping systems in contact with these chemical solutions. Corzan® CPVC has been established as the most specified industrial CPVC technology available from a network of global manufacturers. Corzan CPVC is no stranger to the production process of sodium and potassium hydroxide where it has been successfully utilized in the Chlor-Alkali production process for decades. Having familiarity with the source of the chemicals, it is no stretch to continue to utilize Corzan CPVC in the piping systems of the many industries that have integrated hydroxide into their production processes. CPVC as a material of choice for these applications makes sense because the high level of chlorine in the CPVC polymer chain helps protect finished products from chemical attack. When it does occur, chemical attack can arise in two ways:

Neither of these problems are a one-time phenomenon; they occur over time and their severity is correlated with higher process operating temperatures and caustic concentrations. System designers need to know that, in applications that use caustics, the quality of the CPVC compound used to manufacture piping and storage liners matters in assuring successful performance.

As the charts show, Corzan CPVC can be confidently recommended for caustic applications because of the wide spectrum of operating temperatures and chemical concentrations over which it is effective and reliable. 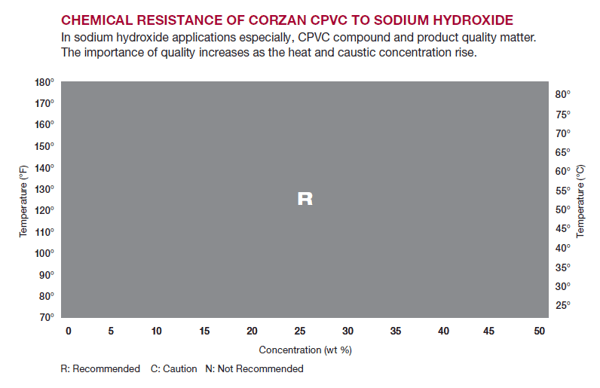 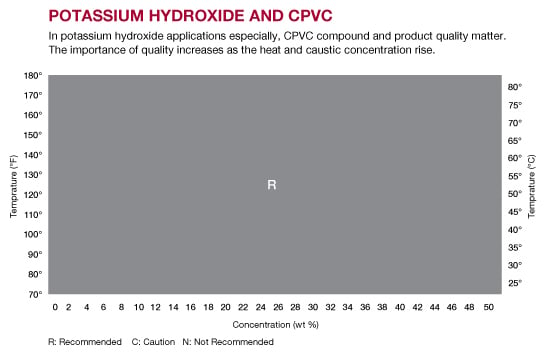 In fact, chlor-alkali piping systems made of Corzan CPVC are extensively specified around the world because of the consistency of this chemical resistance performance, coupled with industry-leading impact strength and exceptional manufacturing partners that produce and distribute the finished products around the world.

This testing indicates that Corzan CPVC performs satisfactorily with 50% sodium hydroxide up to approximately 82°C but the expected life of the pipes in a system cannot be determined.

It should be noted that laboratory testing is by nature limited in scope and cannot possibly evaluate the effect of all potential variables on the performance of a complex operational piping system.

To discuss Corzan CPVC data on compatibility with caustics and more than 400 other chemicals and compounds, contact our team of engineering and product specialists or download our Chemical Resistance Table.