How Industrial CPVC Is Made: From Material Engineering to Finished Product

We often receive questions from industrial engineers about CPVC products—including, what goes into creating CPVC, why is it better than other materials, and ultimately, where can CPVC products be purchased?

In the engineering and production of industrial CPVC, each step is critical—from raw material to PVC, PVC to CPVC, and CPVC to finished product. The highest quality CPVC products available outperform generic alternatives as a result of innovation and quality control from start to finish.

The chart below is included as an easy reference for the CPVC engineering and production process. 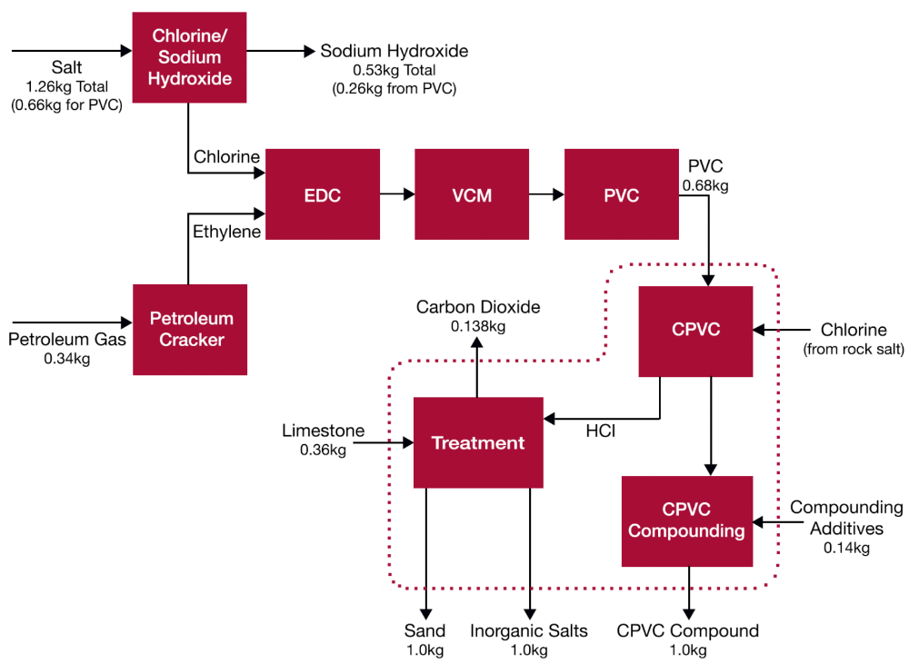 Chlorine is one of the byproducts of chlor-alkali salt processing. Ethylene is extracted from petroleum that is put in a special facility called a cracker. Manufacturers then react these two materials together to form a new liquid chemical: ethylene dichloride (EDC).

Then, through an oxychlorination process, EDC is dehydrated, heated an ultimately broken down into vinyl chloride monomer (VCM).

Vinyl chloride has no real uses in its monomer form, as it is an unstable chemical intermediate and gaseous under normal conditions. It must be stored under pressure in order to maintain a liquid state.

The vinyl chloride monomer needs to be transformed into a polymer—a chain of monomers—to become strong, stable and useful. To do this, manufacturers polymerize VCM in a high-pressure reactor, forming polyvinyl chloride—or PVC.

Manufacturers produce the PVC resin and ship them to production facilities, such as Corzan Industrial Systems’, where the PVC is used to form CPVC. PVC producers may also ship the pellets to PVC manufacturers to be molded for finished PVC products.

Corzan Industrial Systems turns PVC into CPVC. You can see our part of the process in the chart above, outlined by the dotted line.

PVC is popular because it is strong and moldable. Manufacturers can heat it up and turn it into all different kinds of products, such as piping, siding, cable insulation, signs and more.

To build upon those advantages in CPVC, the PVC homopolymer is subjected to a chlorination reaction. The chlorine (C2) and PVC resin react through a basic free radical mechanism, typically initiated by thermal and/or UV energy.

The chart below shows the molecular difference between CPVC (left) and PVC (right), where the large chlorine atoms (red) increase exhibit the increased protection of the carbon backbone.

In PVC, chlorine atoms occupy 25% of the bonding sites, and the rest are filled by hydrogen. The CPVC carbon backbone, in contrast, has approximately 40% of bonding sites filled by chlorine. The increase in large chlorine molecules is the key to protecting the backbone from decomposition.

Learn more about how PVC and CPVC compare and contrast in this blog post.

After the CPVC resin is formed from the PVC, Corzan Industrial Systems infuses it with additives that enhance other inherent properties, such as UV weatherability.

To create long, continuous shapes—such as piping and sheet—extrusion is employed. In extrusion, manufacturers take CPVC powder and feed it into an extruder. The extruder melts it and pushes it through a die head, which spreads it out as evenly as possible and forms it into the final shape. Then, as the material moves through the processing equipment downstream of the extruder, it is corrected to fix any disproportions.

The pipe or sheet is then cooled, hardened, cut and prepared for use—usually in 10 or 20-foot sections of pipe or 4 ft. by 8 ft. sheets (in North America).

Extrusion is efficient for creating pipes and sheet because the machine can run continuously, as long as material continues to be fed into the system, until a new product size must be made.

To create the rest of the CPVC products available to the market—such as fittings, valves, flange adapters—manufacturers use CPVC pellets for injection molding. They use machines (like those in the image below) with a hopper on the top that feeds a specified amount of CPVC into the system.

The system uses a high-pressure screw to melt down the CPVC and push it into the desired mold. After a few seconds of cooling, the CPVC is dropped out of the mold in perfectly formed, ready-to-use pieces.

Because Corzan Industrial Systems does not create the final products used at industrial plants, we require each of our partner manufacturers to participate in our Quality Assurance Program. The program ensures that end users receive the CPVC products with the same consistency and quality regardless of when or where it was produced.

With a base understanding of how CPVC is engineered and manufactured, do you want to learn more about how CPVC delivers reliability to industrial processing applications? Check out this Chemical Processing Special Report to see how CPVC performs in terms of pressure, temperature, corrosion resistance, installation and cost.