What Is The Difference Between CPVC and PVC?

Polyvinyl chloride (PVC) is a familiar and versatile thermoplastic especially known as a piping and fitting material used for residential and commercial plumbing applications.

In the same thermoplastic family to PVC is chlorinated polyvinyl chloride (CPVC).

CPVC, though similar to PVC in name and available product types, exhibits superior resistance to heat and pressure, which enables it to be used in more demanding industrial applications.

The difference in heat and pressure resistance stem from the molecular makeup of each material.

Molecular Makeup of CPVC and PVC

CPVC is a PVC homopolymer that has been subjected to a chlorination reaction. Typically, the chlorine and PVC react through a basic free radical mechanism, which can be initiated by thermal and/or UV energy. 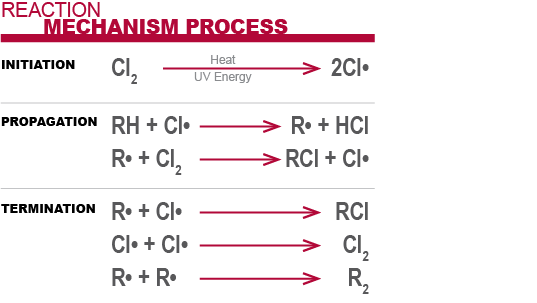 In PVC, a chlorine atom occupies 25 percent of the bonding sites on the carbon backbone, and the remaining sites are filled by hydrogen.

CPVC differs from PVC in that approximately 40 percent of the bonding sites on the backbone are filled with chlorine atoms. The chlorine atoms surrounding the carbon backbone of CPVC are large enough to protect its carbon chain from conditions that often weaken other thermoplastics.

The chlorine content of base PVC can be increased from 56.7 mass percent to as high as 74 mass percent, though typically most commercial CPVC resins contain 63 to 69 mass percent chlorine. 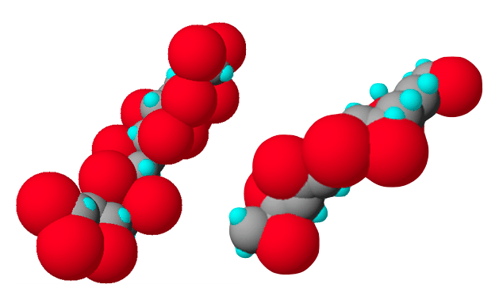 Many important characteristics of CPVC and PVC are consistent between the materials. And in other ways, primarily temperature and pressure resistance, the molecular differences of CPVC make its baseline characteristics superior to PVC.

Thermoplastics are growing in popularity, often as an alternative to traditional metal materials. The PVC market, for instance, which was valued at $57 billion in 2015, is expected to reach nearly $79 billion by 2021.

Unlike metals, which are susceptible to corrosion, scaling and pitting, PVC and CPVC are inherently inert to most acids, bases and salts, as well as aliphatic hydrocarbons. This can extend their service life often for years or decades longer. Chemical resistance is a clear advantage for both CPVC and PVC.

Though, due to the difference in chlorine content, each material has a niche advantage. One example is with higher concentrations of sulfuric acid. Assuming the material is expertly manufactured, CPVC is superior to PVC. Alternatively, a chemical like ammonia is highly reactive with chlorine. The increased chlorine content of CPVC means PVC actually performs better against ammonia and most amines.

Before specifying CPVC, consult a chemical compatibility chart and contact technical support to ensure it is suitable for your application.

This chart shows the chemical resistance of CPVC for use with different chemical groups. For Corzan® CPVC’s chemical compatibility with more 400 chemicals, see the Corzan CPVC Chemical Resistance Data.

The glass transition temperature (Tg) rises as the chlorine content in CPVC is increased. The Tg is the point where the polymer transitions from a hard, glassy material to a soft, rubbery substance, losing its structural integrity.

CPVC’s superior temperature resistance is exhibited in the ASTM standards for each material, as the maximum service temperature for PVC is up to 140°F (60°C) and for CPVC it is up to 200°F (93.3°C). Note: Be sure to check with the manufacturer to check their product’s individual operating capabilities.

Not only can CPVC be used above the maximum service temperature of PVC, but its increased temperature resistance enables it to perform better at temperatures within PVC’s working range. For example, even below 140°F (60°C), CPVC is superior to PVC in terms of impact strength and tensile strength.

While PVC can still be specified for applications at 130°F (54.4°C), the material can withstand significantly less pressure at elevated temperatures (those above 73°F or 22.8°C) than CPVC. 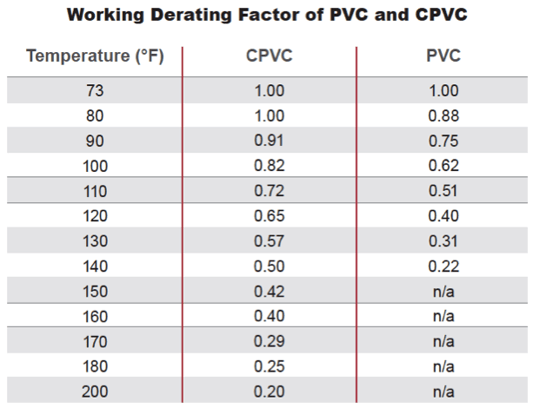 This chart shows that CPVC upholds a higher pressure rating than PVC as temperature increases. Above 140°F (60°C), PVC is beyond its maximum working temperature.

Industrial CPVC, specifically, is engineered to limit flammability and smoke production. Specifically, there are ASTM tests that measure a material's:

Flash Ignition Temperature: The lowest temperature at which sufficient combustible gas can be ignited by a small external flame. Corzan CPVC must be at 900°F (482°C) for this to occur, and rigid PVC must be 750°F (399°C). 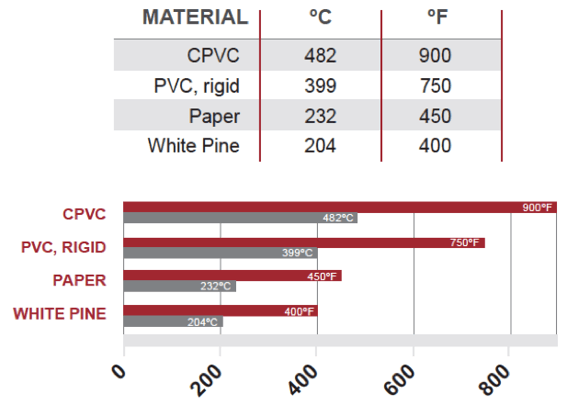 Limiting Oxygen Index (LOI): The percentage of oxygen needed in the surrounding atmosphere to sustain a flame. Corzan CPVC’s LOI is 60 and PVC’s is 45. For reference, Earth’s atmosphere is 21% oxygen.

Both PVC and CPVC resin begin in either a powder or pellet form, often with the additives already blended in. The resin is then shaped or molded into the products used for residential, commercial and industrial use.

Two main molding methods are used for PVC and CPVC.

Pipe, Fittings and Valves: A 2016 PVC market report found that pipes and fittings make up 62% of PVC revenue. The ease of installation and corrosion resistance makes it a valuable replacement to alternative materials. CPVC is commonly specified as pipe, fittings and valves where heat, pressure and chemical resistance are concerns.

Ducting: With increasing air emission regulations, the need for reliable fume handling systems, especially in corrosive environments, is growing rapidly. Depending on the demands, primarily temperature, both PVC and CPVC are specified where dependability is needed.

Sheet and Lining: The excellent corrosion resistance and fire performance of CPVC can be applied to various industrial applications and be overwrapped with Fiber Reinforced Plastic (FRP). And, when the sheet or liner will face less temperature and pressure demands, PVC can be specified.

Other product types: Often starting with CPVC or PVC sheet as a base, fabricators can cut and form the material for use in a number of varying applications.

Applications of PVC and CPVC

The value of PVC and CPVC is in their versatility, relative cost, ease of installation and corrosion resistance. Keeping those advantages in mind, common uses for each differ depending on the demands of the application.

PVC is a low cost, reliable material that can also be installed without the use of skilled, expensive welders. Globally, more than 50% of PVC resin is manufactured for use in construction.

Housing: PVC sheet can be fabricated to replace other materials, such as wood, as a lightweight, sturdy substitute. The material is often painted or finished to give the appearance of other traditional materials.

Signage: Because PVC can be economical, relatively durable and easily painted, sheets of this material are commonly used for signage.

Since CPVC builds on the strengths of PVC, it can be used in many of the same applications, but can be cost prohibitive with inexpensive PVC as a viable alternative.

However, when an application requires the chemical resistance of a PVC or CPVC, with demanding temperature and pressure conditions, CPVC is the reliable option.

Industrial Applications: CPVC is a problem-free, long-lasting solution for the harshest industrial environments, and is often specified in a number of demanding industries.

Residential and Commercial Plumbing: For plumbing applications that require more temperature and pressure reliability, CPVC provides a safe, efficient and flexible system resistant to scaling, pitting, and bacteria buildup—regardless of the water pH or chlorine levels.

Residential and Commercial Fire Sprinklers: The flame and smoke resistance of CPVC, along with its simple joining method, make it ideal for different housing applications.

How Does CPVC Compare to Metal Piping Materials?

For certain applications, PVC and CPVC are commonly specified to replace metal. Check out our resource article, Metal v. CPVC Piping Systems, to learn more about how CPVC stands up to metal alternatives.