Fertilizer, batteries and detergent have one thing in common – all of these products utilize sulfuric acid in the production process. When properly processed and handled, sulfuric acid is one of the most useful and common chemicals used by multiple industries worldwide.

Sulfuric acid, however, is also one of the most dangerous chemicals. In high concentrations, the chemical’s corrosiveness can result in costly damage to industrial machinery. And, even in weak concentrations, it can burn a worker’s skin, eyes, nose and throat and cause chronic respiratory damage after long-term exposure.

For these reasons, industries that process sulfuric acid must have the proper materials to safely and reliably store and transfer this acid.

Sulfuric acid is a by-product of zinc, with zinc ore heated to 1750°F to release sulfuric dioxide gas, which is then collected, cleaned and processed into sulfuric acid. Sulfuric acid is an aggressive chemical that is highly corrosive to materials such as metal piping, which can corrode quickly during exposure. The high pressures and heat present in many industrial processes -- along with the acid’s concentration and the strain applied to the material -- can accelerate corrosion.

Selecting high quality CPVC for sulfuric acid applications is essential – especially as the heat increases and acid concentration decreases. Piping systems made from low-quality CPVC resin and compounding ingredients are very susceptible to the degrading effects of sulfuric acid and sometimes last for only a few months.

Properly processed, high-quality CPVC piping systems have the potential to provide a reliable service life and last years longer than metal. Highly engineered Corzan CPVC® is made from fully pressure-rated materials that can reliably handle a range of sulfuric acid concentrations and high temperatures, as illustrated in the following graphic. 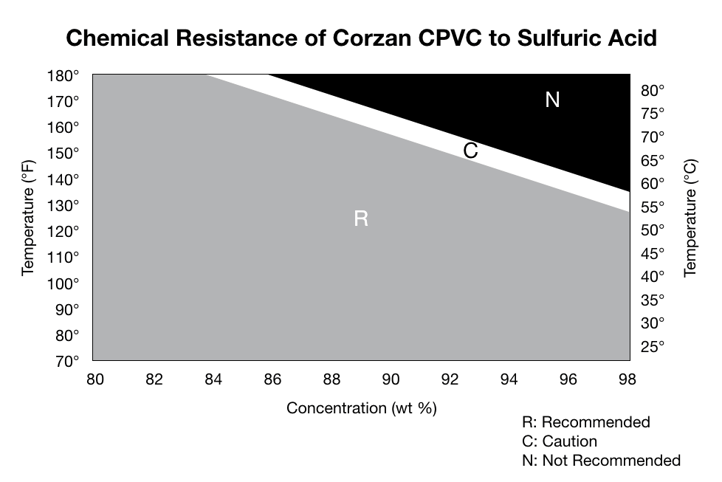 Steel pipes were initially installed to transport sulfuric acid through the various stages of the production process. But the acid’s aggressive nature corroded pipes and resulted in regular replacement to avoid bursts. The company eventually installed steel pipes lined with lead, which helped reduce corrosion but made the pipes heavy and difficult to install. Extra hangers were required to prevent bending and sagging.

The sulfuric acid manufacturer then experimented with pipes made of polyethylene (PE) and PVC reinforced with a fiberglass sheath. Both systems helped reduce corrosion and were easier to install than metal piping but sometimes burst as a result of the sulfuric acid system’s changing temperatures and pressures.

The plant subsequently installed Corzan CPVC on a test basis to determine whether the piping system could meet the facility’s specific needs. A local heating and sanitation business installed a few meters of test pipe in the sulfuric acid application, with the installation completed in one day.

During the test period, the Corzan CPVC piping system performed so flawlessly that the manufacturer made the decision to replace all of the existing pipe in the sulfuric acid system with Corzan CPVC operating at 10 bar. After years of service, the manufacturer reported the Corzan CPVC system has withstood the environmental extremes, including the high temperatures, pressures and corrosion that are constantly present within the sulfuric acid operation.

Regardless of the manufacturer, CPVC offers several bottom-line benefits, including the fact that it is light weight, thermal conductive and easy to install. All CPVC industrial piping systems, however, do not perform the same.

CPVC compounds are made with base resins that have different molecular weights and varying chlorine content along with different additives that can affect their chemical resistance and long-term performance. Just as two different types of metallic piping systems will likely perform differently, two CPVC industrial pipes made from different compounds will provide different results.

Designers and specifiers should always check with the industrial piping supplier to determine the type of tests that have been conducted on a specific CPVC compound. Corzan Industrial Systems and its partner manufacturers have tested the performance of Corzan CPVC against hundreds of different chemicals to determine its long-term performance. Tests have also been conducted to identify minimum burst pressure requirements, dimensional tolerances, residual stress requirements, drop impact requirements and fusion properties.

The graphic that follows illustrates the long-term performance of Corzan piping systems under pressure as tested in accordance with ASTM D 1598, Method for Time-to-Failure of Plastic Pipe Under Constant Internal Pressure. Data was obtained for up to 16,000 hours and was evaluated in accordance with ASTM D 2837, Standard Method for Obtaining Hydrostatic Design Basis for Thermoplastic Pipe Material. 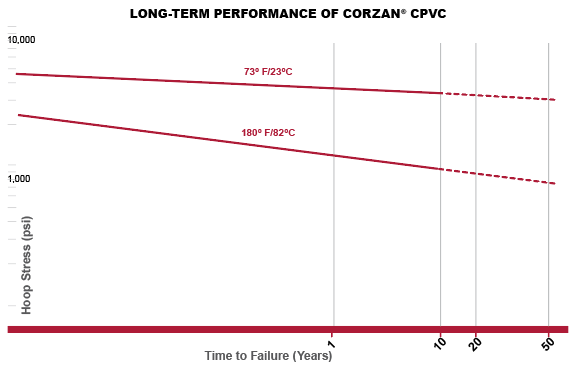 Corzan CPVC’s chemical resistance and high temperature and pressure capabilities make it an excellent choice for sulfuric acid systems. The piping system is able to handle the range of sulfuric acid concentrations used in production and processing facilities.

Installing Corzan CPVC is simpler than installing metal as the CPVC piping weighs substantially less, which makes it easier to handle, modify and maintain. The chart below compares the weight of plastic piping systems with metal materials. 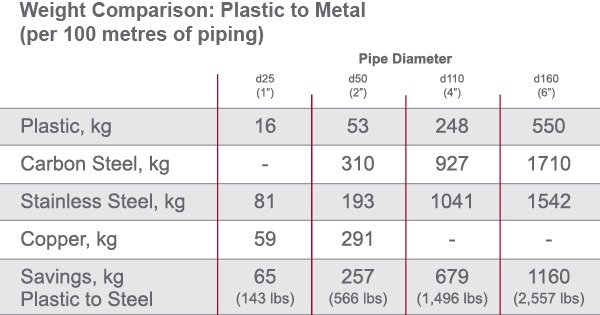 Corzan CPVC piping is usually joined by a solvent cement welding process, which can be performed anywhere without heat, flame or hot work permits. Solvent cement fuses the CPVC material together to economically create joints that are the strongest part of the entire piping system. Corzan CPVC may also be joined with mechanical joining systems.

Minimal training is required to learn how to properly install Corzan CPVC piping. However, Lubrizol highly recommends that installers become ASME B31.3 qualified in the solvent cement welding process. Once installed, the system will require little or no maintenance since it will not corrode or scale, resulting in reliability and lower life-cycle costs.

Corzan CPVC has a nearly 60-year history in the chemical processing industry. Visit our website or contact a Corzan engineering expert or one of our partner manufacturers to learn more about Corzan CPVC’s corrosion resistance and how the piping system ensures safe, reliable and cost-effective performance.

Information for this blog was taken, in part, from the following Lubrizol resources: