Americans today produce and consume more energy, drive more miles and live more comfortably than ever before while reaping the rewards of a cleaner environment. These facts are backed by the Environmental Protection Agency (EPA) air quality data and refute some claims that air quality in the U.S. is getting worse.

The reality is that coal-fired power generation plants produce much cleaner air today than any time in the past. Modern plants and those retrofitted with pollution reduction technology presently supply about 30 percent of the nation’s electricity.

Air quality had been improving for decades – even before Congress passed the Clean Air Act – and was driven, in part, by businesses that considered certain types of pollution as waste and worked to reduce this waste by making technological improvements designed to increase efficiency.

Regulations under the Clean Air Act, the Clean Air Act Amendments of 1990 and other standards have also helped reduce pollutant levels from coal-fired facilities. Since 1970, the six “criteria pollutants” have decreased significantly even though electricity generated by coal-fired plants has increased by more than 70 percent.

The Clean Air Act was enacted on Earth Day in 1970 and created the EPA. It also presented the opportunity to address the American public’s growing concerns about environmental pollution. 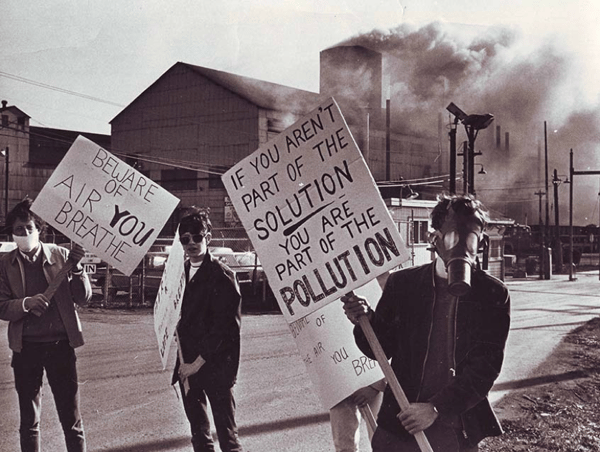 The Clean Air Act required the EPA to set National Ambient Air Quality Standards to control pollutants considered harmful to the public’s health or the environment. These pollutants are referred to as criteria pollutants and include carbon monoxide, lead, sulfur dioxide, nitrogen oxides, ground-level ozone and particulate matter.

Congress modified the Clean Air Act by enacting the Clean Air Amendments of 1990 to elevate environmental protection as a top priority within the federal government. The modification placed a cap on the level of sulfur dioxide emissions that electric power plants were allowed to produce and promoted the use of clean low sulfur coal and innovative technologies to clean high sulfur coal through the acid rain program.

To comply with the Clean Air Act Amendments of 1990, electric utilities had several options:

Several rules and regulations based on the Clean Air Act Amendments of 1990 helped to improve air quality by requiring coal-fired plants to install flue gas desulfurization (FGD) systems. Most of these FGD systems included a wet design that resulted in a significant increase in synthetic gypsum becoming available on the market. The increased gypsum created a profitable new commercial industry and resulted in more affordable housing.

In December 2011, the EPA finalized the first national standards to reduce mercury and other toxic air pollution (such as hydrogen chloride) from coal- and oil-fired power plants. Even though more than 20 years had passed since the Clean Air Act Amendments of 1990 were enacted, some power plants still did not control toxic pollutants emissions -- even though pollution control technology was widely available.

The standards were established to accomplish the following:

Individual facilities were required to comply with the emissions standards established under MATS by a specific date. Existing sources of air pollutants generally had four years to comply with MATS, if needed.

The EPA implemented the Cross State Air Pollution Rule (CSAPR) in July 2011 to replace The Clean Air Interstate Rule. The CSAPR requires certain states in the eastern half of the U.S. to significantly improve air quality by reducing sulfur dioxide and nitrogen oxides emissions that contribute to ozone and/or fine particle pollution across state lines. The improvements help downwind areas achieve and maintain the EPA’s soot and smog air quality standards, or the National Ambient Air Quality Standards.

The Results of Complying with Clean Air Regulations

Today’s coal-fired electricity-generating power plants produce more power with fewer emissions of criteria pollutants than ever before. Since the EPA set permissible levels for the pollutants, sulfur dioxide emissions from coal-fired power plants decreased by 85 percent between 1990 and 2015, and nitrogen oxide emissions were reduced by 84 percent during the same period.

Corzan CPVC is also ideal for demineralized water and post-process treatments; demineralized water is used to run the steam engines that produce electricity. Corzan CPVC piping is available in diameters up to 24 inches to meet most power plant requirements, with Corzan pipe and fittings available globally through Corzan’s partner manufacturers. Contact a Corzan CPVC piping system expert for application engineering support or to schedule a free technical consultation.