What are Corrosion and Scaling?

Corrosion is the deterioration of material – primarily metal – resulting from various reactions that occur between the material and its surrounding environment. There are several types of corrosion:

Scaling is a buildup of minerals around the interior walls that, over time, constrict the inside diameter of the pipe. 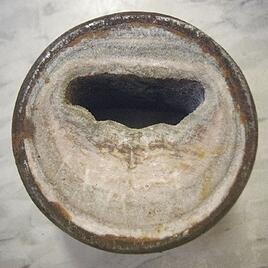 At certain pH levels and temperature ranges, different metal ions and minerals are soluble, allowing them to flow through piping systems with little to no problem. But outside those ranges, ions can drop out of the solution and attach to the walls of a metal pipe, building up over time to create scale. Scaling chokes off flow, forces pumps to work harder and increases pressures inside the system. Scaling can also be a source of localized corrosion.

The Consequences of Corrosion

Corrosion is a widespread and expensive problem impacting every industry around the globe. The 2016 NACE International IMPACT study estimated the global cost of corrosion at approximately $2.5 trillion USD. Corrosion affects flow rates and efficiency while weakening pipes, which can result in costly downtime and expensive repairs. Metallic ions introduced to a product stream can produce off-spec products or products unable to perform as expected. In a latex paint facility, for example, metal may contaminate paint, resulting in biological growth or fouling of the product.

Corrosion can be dangerous to more than just finances. Corrosion may also cause loss of containment (LOC), leading to leakage or streaming of liquids (including acids). Many acids are clear like water, and an unsuspecting worker could be hurt badly by acid leaking from a pipe. Corroded bits of metal can also affect any reactions taking place in the system, such as acting as a catalyst for an immediate exothermic reaction resulting in a dangerous level of heat.

Corrosion and scaling present water contamination dangers as well. Corrosion can lead to dangerous lead and copper contamination when pipes made of these materials are part of the potable water ecosystem. And the microbial slimes and biofilm that can form in metal piping foster the growth of bacteria that can cause MIC or serious illness, like Legionella.

The Difference You Can See

The chemical makeup of Corzan CPVC lacks the conditions that cause corrosion. Its smooth surface finish also adds resistance to scale build-up. Corzan CPVC has a Hazen-William C Factor (which measures surface roughness) of 150 and can maintain this rating throughout its entire service life. New cast-iron piping, by contrast, is rated only at 120, and this number can drop to 60-80 after the piping becomes worn or pitted. The friction losses through the piping system increases as the C Factor decreases. 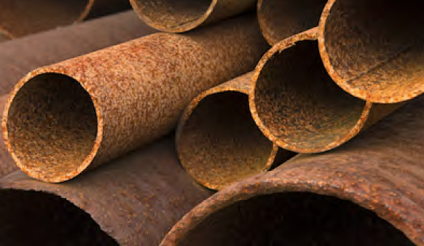 Adding Corzan CPVC as a tank lining or using it in dual-laminate piping mitigates many of the corrosion problems experienced with metals. In dual laminate piping, a thermoplastic liner serves as the pipe’s interface with a liquid or medium. When Corzan CPVC is specified, the material’s inherent resistance to many of the aggressive, highly corrosive fluids used in chemical processing systems makes it ideal for these demanding applications. The Corzan CPVC liner is then reinforced on the outside with a fiberglass reinforced polymer (FRP) shell. The fiberglass is applied with a bonding resin and, when cured, forms a solid exterior. This creates a pipe that is both relatively lightweight and structurally strong.

While Corzan CPVC has lower thermal conductivity than metal, code compliance may still require insulation. But even if there is a break in the insulation vapor barrier or if it is installed incorrectly, Corzan CPVC will not corrode under insulation.

As for scaling, the elements within Corzan CPVC material do not attract the metal ions or minerals, keeping the interior of the pipe free of buildup.

Two pipes after years in use for wastewater treatment. The metal pipe (left) is severely corroded, while the Corzan CPVC pipe (right) has maintained its surface smoothness and inside diameter.

To get a long, reliable service life, choose a material that naturally resists one of the most expensive problems of metallic alternatives: corrosion resistant Corzan CPVC.

Learn about the various types of corrosion and why you can depend on Corzan CPVC to prevent it in piping systems.
read more

Blog Post: Solving the Problem of Corrosion Under Pipe Insulation

Find out why Corzan CPVC is the best choice for addressing corrosion under insulation (CUI) problems.
Read More