As materials science experts, the formulation scientists at Lubrizol are committed to creating compounds that don’t just meet expectations but far exceed them. Corzan® CPVC is rigorously tested both in-house and by third parties to beat industry requirements for resistance to flame and smoke, bursting, flattening and impacts.

The natural properties of Corzan CPVC limit both flammability and smoke production. Corzan CPVC has undergone tests that demonstrate exceptional resistance to burning, flame-spread and smoke generation, as well as low thermal conductivity. Not only does it conduct less heat and produce less smoke than competing materials, Corzan CPVC also has a limiting oxygen index (LOI) of 60% (LOI is defined as the minimum oxygen concentration that is necessary to sustain a stable combustion of the specimen after ignition; the percentage of oxygen in the atmosphere is 21%), making Corzan CPVC self-extinguishing in normal atmospheric conditions. When exposed to fire, it forms a protective char around the pipe that stays in place without melting and dripping, which could contribute to fire spread. Compared to PEX and PP-R, Corzan CPVC outperforms when exposed to flame. And while metal will last longer before failure when exposed to direct flame, metal can conduct heat into adjacent areas, causing harm even to areas not burning. And tests by the New York State Modified Pittsburgh Protocol and the Biological Services Division of the United States Testing Company (now SGS) found that the smoke one may inhale from burning CPVC is no more hazardous than a campfire burning Douglas Fir wood.

Corzan CPVC pipe and fittings have very high burst pressure requirements for quality control testing. The following video shows a one-inch schedule 80 Corzan CPVC pipe which did not fail at the ASTM 441 requirement of 2020 psi, nor at the burst unit’s limit of 2900 psi. Corzan CPVC has equal burst strength at its joints. When properly cement-welded, separate pieces of Corzan CPVC chemically fuse into a single piece and yield the same burst test results.

The pressure rating of Corzan CPVC is determined with long term pressure tests conducted in accordance with ASTM D1598. The longest of these tests exceed 16,000 hours, and the data is then evaluated per ASTM D2837. The linearity of the data on a logarithmic scale allows it to be extrapolated out to predict the material’s long-term performance under pressure. This extrapolation is used to determine the pipe’s pressure rating. 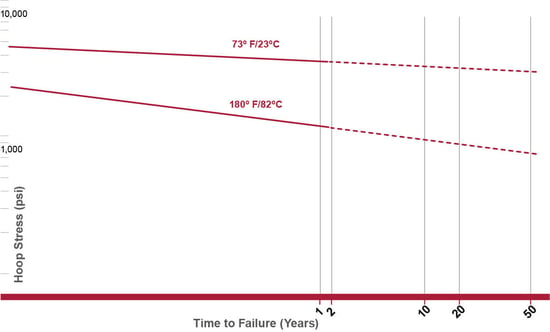 One of Corzan CPVC’s many quality control tests is the flattening test, during which the pipe is required to withstand being crushed down to 40% of its original diameter without cracking or splitting. Although impact testing is not required in the ASTM F441 pipe standard, Lubrizol formulates Corzan CPVC to have exceptionally high impact strength to withstand the rigors of jobsite handling. The following video shows a Corzan CPVC pipe receiving 300 foot-pounds of impact without breaking, according to ASTM D2444. Generic CPVC shattered under the same pressure. Great care has been paid to the Corzan CPVC compound formulation to make it resilient. All piping systems exhibit some degree of wear over time, but Corzan CPVC will usually outperform metal when transporting abrasive media and has been used successfully in many abrasive industrial applications.

No single test method exists to consistently predict the abrasion resistance of a material to the broad range of potentially abrasive conditions. As a result, the best guide in selecting materials for abrasive service is past experience.

However, one widely referenced test method for abrasion resistance is the Taber Abrasion Test. Weight loss of a material is measured after being exposed to an abrasive wheel for 1000 cycles. While the Taber test cannot predict actual performance of a material to a given application, it does provide a relative measure to compare different materials. 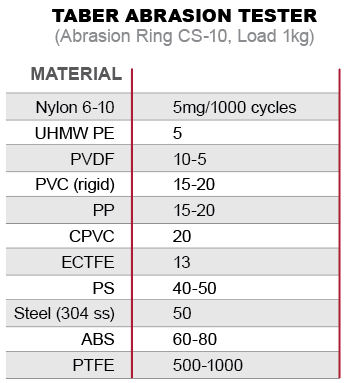