It is important to consider thermal expansion when designing any piping system, including one made of Corzan® CPVC material. 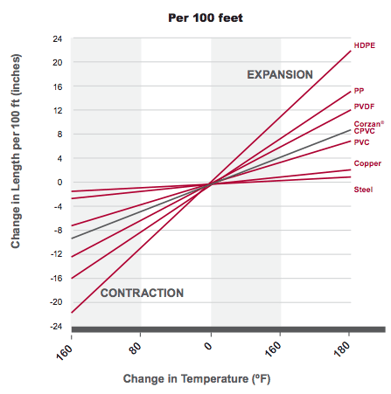 The expansion or contraction of thermoplastic pipe may be calculated from the following formula, or by using Corzan Industrial System’s Thermal Expansion Calculator.

As a rule of thumb, if the total temperature change is greater than 30°F, compensation for thermal expansion should be included in the system design.

The recommended method for accommodating thermal expansion is to include expansion loops, offsets, or changes in direction where necessary in the system design. 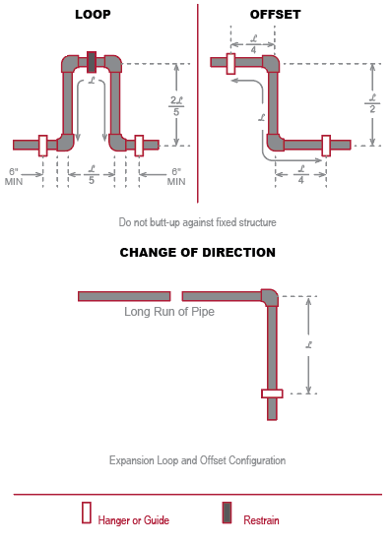 Expansion loops and offsets should be constructed with straight pipe and 90° elbows, which are solvent cemented together. If threaded pipe is used in the rest of the system, it is still recommended that expansion loops and offsets be constructed with solvent cement to allow the mechanisms to better handle the bending stresses incurred during expansion and contraction.

The expansion loops and offsets should be located approximately at the midpoint of the pipe run. Valves or strainers should not be installed within an expansion loop or offset.

If thermal expansion is not accommodated, it is absorbed in the pipe as an internal compression. This creates a compressive stress in the pipe. The stress induced in a pipe, which is restrained from expanding is calculated with the following formula:

Impact of Thermal Stress on CPVC vs. Steel

However, as can be seen by the equation above, the stresses induced in the piping system due to restrained thermal expansion are dependent on the material’s modulus as well as its coefficient of thermal expansion.

For instance, restrained expansion over a 50°F temperature change will produce approximately 600 psi of stress in a CPVC system, but 9800 psi of stress in a steel system. CPVC’s relatively more flexible nature will usually allow it to absorb its lower stresses in a buckling or snaking of the line if necessary. Because steel piping is too rigid to buckle, its higher stresses are often transferred to surrounding structures, resulting in damaged supports, anchors or even abutting walls.

Thermal expansion is a factor for which all piping system designs need to account. Here are 4 mechanisms capable of preventing damage and unnecessary shutdowns.

Schedule a free process suitability and technical consultation with our regional product and engineering experts.