Proper installation of Corzan® piping systems is critical to the performance of the system. A few simple guidelines should be followed to ensure long service life and safe operation.

Proper care should be exercised when transporting, storing or installing Corzan piping to prevent damage.

Lengths of pipe can be easily and successfully cut by following a few simple guidelines.

Burrs, chips, and dust should be removed following cutting to prevent contamination of the piping system and to facilitate joining.

Corzan piping can be installed using a number of joining techniques. Solvent welding, flanging, and threading are the more common methods and are covered in greater detail on their corresponding pages. Back welding of joints using hot gas (air) welding is also covered.

Corzan piping can be installed above ground or buried underground. Methods to minimize stress on the piping through proper installation are covered in detail below.

Any metal or non-metal piping system is subject to stress-induced corrosion. As a result, special attention should be given to minimizing stress throughout the system.

The total stress on a piping system includes not only the known pressure stress, but also stresses from sources such as expansion or installation. Expansion stresses can be minimized with expansion joints or loops. Attention to proper installation techniques also assists in minimizing stresses. Pipe and fittings should be properly prepared prior to joining.

To account for expansion and contraction in design, check out our thermal expansion calculator.

After the piping system is installed and any solvent cement is fully cured, the system should be pressure tested and checked for leaks using water. Using compressed air or inert gas for testing is not recommended.

All entrapped air should be allowed to vent as the system is filled with water. Water filling should occur at a velocity not more than 1 ft./sec.

After filling, the system should be pressured to 125% of the maximum design pressure of the lowest rated part of the system. Pressure should then be held for no more than one hour while the system is checked for leaks. 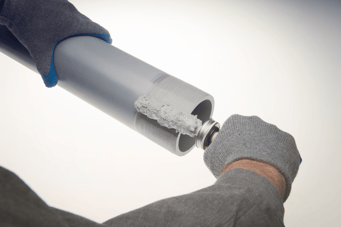 This is a fast, easy installation process that uses solvents and resin to chemically fuse the pipe and fitting together at the molecular level, essentially creating one continuous piece of plastic.

Flanging can be used to provide temporary disassembly of a piping system or can be used when it is not possible to make solvent cemented joints at the assembly site. Flanges are joined to the pipe by solvent cement or threaded joints.